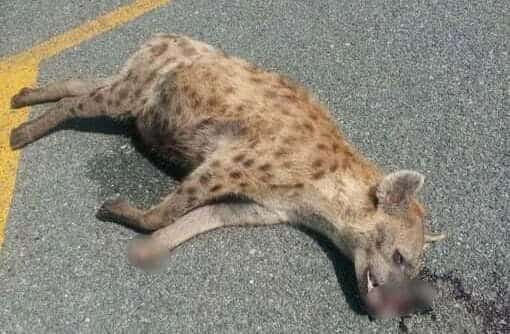 A truck driver from a big logistics company in South Africa was spotted cutting off some parts of a hyena which was hit by a truck on the A33 about 40km to Kazungula on Monday.

The incident has left many truck drivers baffled and fueled witchcraft theories.

Why would one take any part of a hyena? There is no place in Southern Africa known to eat hyenas. So there should be a sinister reason for the driver’s actions.

May I remind truckers that it is an offence to kill or hunt wildlife without a licence. In all the SADC countries, you may be locked up if found in possession of wildlife or parts thereof.

So what could be the reason for this driver to cut out parts of a hyena?

Well, hyena body parts are used by those who practice black magic. They are burned with herbs to form what is believed to be a potent anaesthetic. Burglars think the fumes can overcome the occupants of houses knocking them unconscious, and then they freely ransack their houses.

It’s believed that people cut up the eyebrows and the tails of the hyenas and mix them with African herbs.

Hyenas are known to sniff carcasses from very far away, this, thieves are believed to believe that gives them the same sense of sniffing out victims to target.

Hyenas have been killed for their body parts ever since the black magic belief found its way into the criminal world.

Hyenas are said to fetch a lot of money when sold to traditional healers.

In the workplace, stories of workers using muthi for various reasons have been reported. One such story happened at NiDa Transport where a truck could not start after being muthi-locked by its driver.

When another driver was instructed to take the truck, the engine failed to start until the muthi was removed from the vehicle.

Recently, a video of another truck driver filmed while shoving into his boot what was initially thought to be a werewolf but was later discovered to be a hyena.

Here are some rections from social media:

What does it do?

What do you think? What has been your experience?