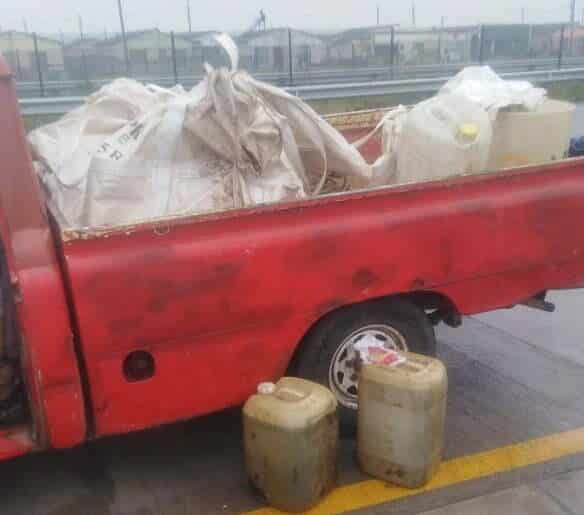 Truck driver, two others nabbed for diesel theft in PE

A truck driver and his two accomplices have been arrested in Nelson Mandela Bay. The trio was caught red handed by detectives who had just completed their duties and on their way home around 02h00 on Tuesday morning.

Police spokesperson Priscilla Naidu said that two detectives from NMB District Truck jacking Task Team and NMB District Tracing Team were on their way home when they came across the three loading containers into a red bakkie.

“While driving on Uitenhage Road towards Kwadwesi they spotted three males busy loading 25 litre containers (four in total) filled with liquid at the side of the road.

“A horse and trailer truck was parked with a red Toyota bakkie next to it. The members immediately stopped to investigate and on investigation, they discovered that the liquid in the containers was diesel.

“The suspects were surprised by the two members and could not provide a reasonable explanation of their possession of the diesel,” said Naidu.

The detective officers established that the driver of the truck had used the company’s diesel card to fill diesel into the containers.

With the assistance of PE K9 unit members, the three suspects aged 39, 40 and 62 years old were arrested on charges of theft and possession of suspected stolen property. They are expected to appear in the New Brighton magistrates’ court soon.

The Toyota bakkie was also confiscated by the officers.

“A police officer is never off duty and is always ready to go beyond the call of duty to tighten their grip on criminals. Their actions signifies the calibre of people who dedicatedly and passionately respond to their vocations. Even in their tiredness, they did not fail to execute their duties. Criminals are warned that our policemen/women will appear in their faces when they least expect us”, added Brig Kupiso.