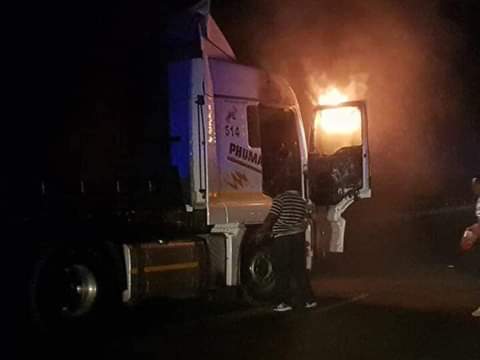 Truck drivers war as it happened

Durban – The war on foreign truck drivers escalated on Monday as the N3 was blocked at several points as well as the R34 near Richards Bay. A truck was set alight near Howick on Monday, following an attack on a truck on Saturday night at Town Hill, which set off a series of accidents.

It is believed the first attempt to block the N3 was made on Saturday night when a truck driver was stopped at gunpoint on the N3 at Town Hill near Hilton.

The SK Trucking driver was pulled out of his truck before his attackers doused him and his truck with petrol. The attackers then parked the truck across all three lanes, causing three cars to crash into it due to the poor visibility in misty conditions.

SK Trucking’s Avinash Shamlall said the attack happened very late at night and that the driver had gone for a medical on Monday following the attack.

Midlands EMS said the attackers were about to set the truck alight when the first car crashed into the truck. Two more followed and six people were injured.

TRUCK DRIVER WARNINGReports of disturbances at Hilton, PMB and at the Mooi River toll. Stay clear of the area. Anyone with more information please share with others.

Protesters attempted to block the N3 southbound at Cato Ridge on Monday morning before they were quickly dispersed by police.

Shamlall said his driver, who is a foreign national, was not harmed.

KwaZulu-Natal police spokesperson Lieutenant-Colonel Thulani Zwane said no arrests have been made.

Although he could not confirm the link between the attack on Saturday and the blockades on Monday, several police sources said the two are believed to be connected.

On Monday morning Durban Metro Police were called out to the Cato Ridge area to assist the Road Traffic Inspectorate (RTI) in dispersing a crowd of 60 people after eight trucks had blocked the N3 southbound.

Metro police spokesperson Senior Superintendent Parboo Sewpersad said: “We received a call from RTI that there was a large group of people stopping trucks on the N3 and they were starting to block the road.”

Shortly after the crowd had been dispersed, a truck was left abandoned across all three lanes of the N3 southbound near the Chota Motala off-ramp in Pietermaritzburg.

Traffic officials worked as quickly as they could to tow the truck out of the road and open the freeway again.

A Metro helicopter was called out to assist while hundreds of cars sat bumper to bumper as traffic police tried to guide vehicles onto alternative routes.

Shortly after the road was cleared, RTI received a call from the Richards Bay area saying trucks had blocked the R34.

RTI spokesperson Zinhle Mngome­zulu said she believed a syndicate was involved as the incidents all happened within a short space of time. She said the Public Order Policing Unit was called to help disperse the crowds and the road was cleared within an hour.

At about midday on Monday, attackers petrol-bombed a truck on the N3 near Howick.

The driver of that truck is believed to be South African.

Later in the afternoon 21 people were arrested near Camperdown for trying to block the N3. They were all taken to Camperdown police station.

Although All Truck Drivers Foundation (ATDF) chairperson Sipho Zungu said he could not say whether their members were responsible for the blockades, drivers were dissatisfied with Transport Minister Blade Nzimande’s lack of response after their meeting earlier this month.

Zungu was quoted in The Witness on April 5 as saying that despite agreements made between truck owners and government, they wanted transportation companies to stop employing foreign nationals.

On Monday he said that the minister was “dilly-dallying”.

“We haven’t received any communication from him or his office. He promised to get back to us before month end. The drivers feel disrespected,” he said.

“No date for a follow-up meeting has been given. All we keep hearing are empty promises. It seems the only way to get their attention is by blocking off the roads.

“We want all these jobs to be given to South African drivers who are sitting at home with licences. We can’t have foreigners working while our brothers are unemployed,” he said.

Zungu said they wanted the department to attend to this and other issues before the May 8 elections.

This Phumaphambili driver was lucky to escape unhurt when a petrol bomb was hurled into his truck at Mooi River on Monday night.