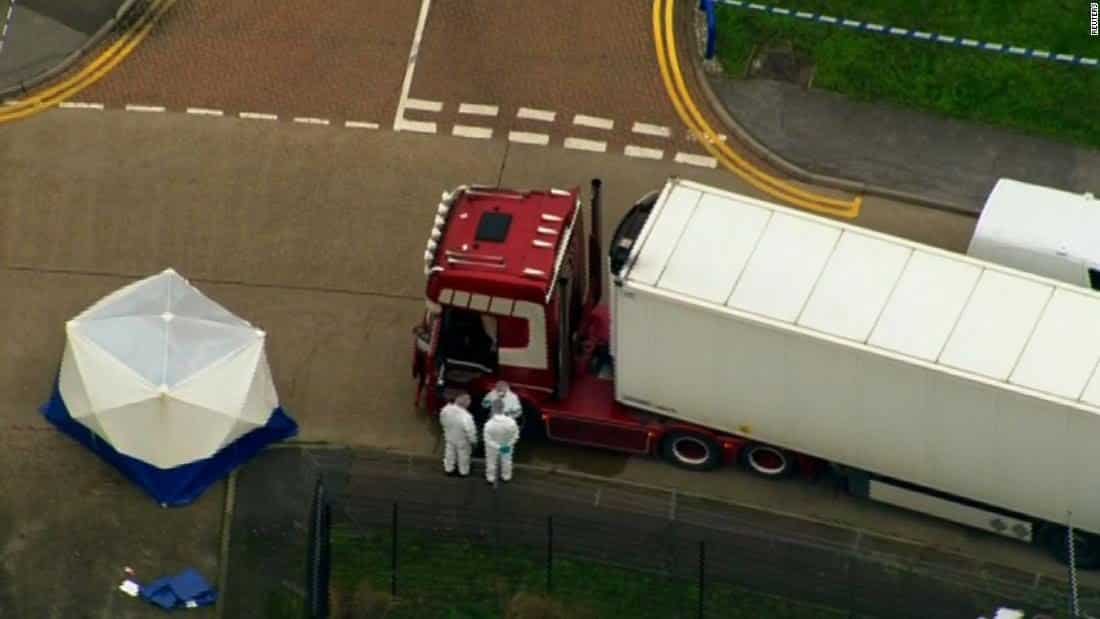 London – UK police have launched a murder investigation after 39 people were found dead in a truck container at an industrial park in Essex, 30 kilometers east of London. One of the victims was in their teens.

Authorities believe the truck, which originated in Bulgaria, entered the UK through the Welsh port of Holyhead over the weekend. A regular ferry service connects Holyhead with the Irish capital, Dublin.

Police say a 25-year-old Northern Irish truck driver has been arrested “on suspicion of murder.”

“We are in the process of identifying the victims, however, I anticipate that this could be a lengthy process,” Chief Superintendent Andrew Mariner said in a statement.

They have arrested a 25-year-old Northern Irish truck driver “on suspicion of murder” after finding the bodies early on Wednesday morning, Essex Police said.

“We have arrested the lorry driver in connection with the incident who remains in police custody as our enquiries continue ” Mariner added.

Aerial footage of the scene, filmed by Reuters, showed a police cordon and black tent set up at the back of the white container, which was attached to a red Scania truck.

“This is a tragic incident where a large number of people have lost their lives. Our enquiries are ongoing to establish what has happened,” he said.

Police have placed a cordon around the area and say they are working with the local council “to mitigate against any impact our investigation scene will have locally.”

News of the grisly discovery shocked British lawmakers; the local Member of Parliament speculated that the incident was linked to human trafficking. Police have not confirmed that claim.

Jackie Doyle-Price, who is the Conservative MP for Thurrock, where the bodies were found, wrote on Twitter: “Sickening news of 39 people found dead in a container in Grays.

“People trafficking is a vile and dangerous business. This is a big investigation for Essex Police. Let’s hope they bring these murderers to justice.”

Police say the lorry is believed to have originated in Bulgaria. It entered the UK on October 19.

Prime Minister Boris Johnson tweeted that he was “appalled by this tragic incident.”

“I am receiving regular updates from the Home Office & will work closely with Essex Police as we establish exactly what has happened. My thoughts are with all those who lost their lives & their loved ones,” he wrote.

The UK Home Secretary, Priti Patel, said she was “shocked and saddened” by what she called the “utterly tragic incident,” according to her Twitter account.