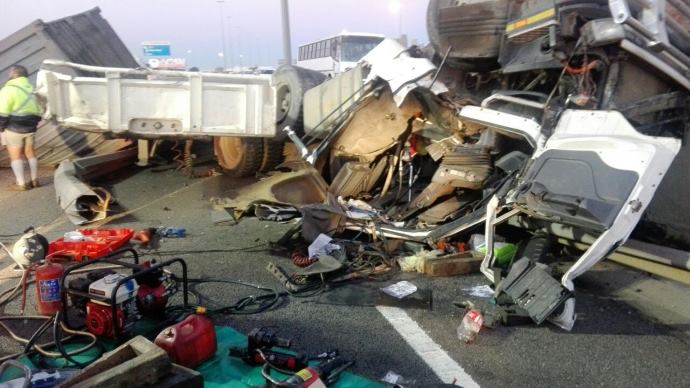 A truck driver sadly died on Thursday morning after his truck overturned on the R21 freeway in Kempton Park.

Netcare 911 paramedics responded to the scene of the fatal crash on the R21 direction towards the airport, just before the Atlas Road off-ramp in the Kempton Park / Pomona area.

Upon arrival, paramedics found that a truck had overturned and was lying across the highway. Reports from the scene indicate that the truck was travelling towards Pretoria when it crashed over the centre barrier and obstructed the highway in the opposite direction.

No other vehicles were involved.

Rescue crews from Netcare 911 and Ekurhuleni EMS worked together and used specialised equipment including the “Jaws of Life” to access the wreck of the cab.

One occupant was located but sadly he had died as a result of the severe crash. The man believed to be the driver was approximately 50 years old.

The Ekurhuleni Metro Police were also at the scene to investigate the incident.

Butterworth – A video has emerged online of criminals who allegedly forced…

Durban – CCTV footage has captured an out of control truck plunging…