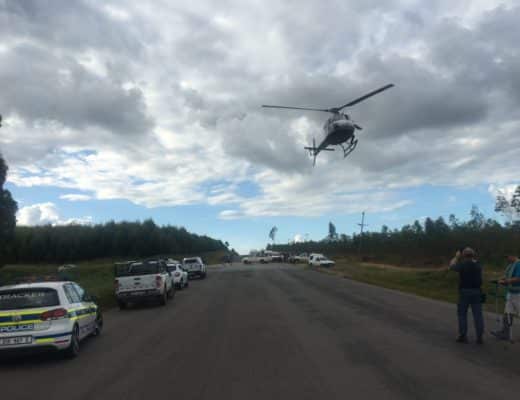 WHITE RIVER – A 64-year-old man was left paralysed, and his family devastated, after he was shot three times in an apparent attempted hijacking. Mr Nicolaas Cronjé, a truck driver, was rushed to Mediclinic Nelspruit with gunshot wounds on Friday afternoon.

His daughter, Ms Chantal Botha, said her father told her he had done his last delivery for the day and was about to turn onto the Sabie/Lydenburg road near Doornkraal when a red Toyota Tazz pulled up in front of him in front of a store.”He thought they had car problems,” she told Lowvelder yesterday. “He said he saw about five or six people around the vehicle. My dad was idling the truck and then moved to try and avoid the vehicle when the one man pulled out a gun.”

They pulled his co-driver out of the truck and hit him with a gun. He ran away and the assailants turned their attention to Cronjé.

“The man first shot my father in the back from the passenger side,” Botha said. “My dad was instantly paralysed, so he could not hit the brakes, and the truck rammed into the Tazz.” She said the suspect shot him again and the bullet hit the side of her father’s stomach. “My dad said the man walked around the truck and opened his door. He stood close to him, looked him in the eye and shot him right in the knee,” she said. The men did not say anything to her father and took nothing off him.”All the while my father was pleading for them to just take what they wanted and not hurt him, but they ignored him,” she said.

According to an eyewitness, who is a client of ACS Security, he and a colleague were driving past when he saw the Tazz which had stopped in front of the truck. “We saw some men come out of the shop with guns and the driver and passenger of the Tazz get out of the vehicle. It looked like they did not even talk to the driver, they just shot him,” he said. He said he saw five suspects. Two had come out from the shops and three were in the vehicle. The witness and his colleague stopped and waited for the Tazz to pass, so they could take down the registration number.

“I phoned ACS Security and told them what happened and to send an ambulance,” he said. They followed the Tazz until they saw the police. ER24 branch manger Mr Greg Wilcox and his team treated the driver at the scene and transported him to Mediclinic Nelspruit. Botha said when her mother, Ms Karin Cronjé, got the call about her father, she collapsed. “The bullet hit my father in the L1 and L2 vertebrae. He is now paralysed from the waist down. He is the only breadwinner in the family and now my mother does not have an income,” she said. Cronjé will be transported to another hospital in Johannesburg for rehabilitation, which will take approximately six months.

Bossies Community Justice’s (BCJ) Mr Albert Gryvenstein and Mr Danie Theron were close to the scene when ACS Security contacted them. “We were about two minutes behind them. I called Hi-Tech Security White River’s Mr Dick Strydom to close up the area. When we got there, we could still hear gunshots going off.”We searched the plantation with J&M Security manager, Mr Shaun Terblanche, and members from various security companies, including AfriForum White River members,” he said.

Strydom headed for the Brondal Road when he got the call from BCJ. “I saw Nelspruit police flying squad’s Capt Pieter Smit chasing the suspects’ vehicle. They drove into the plantation and the helicopter was above them,” Strydom got out of his vehicle and also gave chase in the plantation. “You could not see where you were going, as the terrain is thick and the police in the chopper were shooting at the suspects,” he said.

Smit was travelling from the direction of White River when he received a radio message that suspects were on the run after an attempted hijacking. “The police helicopter was deployed and was in communication with me,” he said. As Smit turned onto the Brondal Road, a Tazz passed him. “I saw only two suspects in the vehicle although I was told there were three. I saw the vehicle had been damaged in the rear,” he said. Smit made a U-turn and gave chase. The vehicle skipped a T-junction and veered off the road, almost colliding with oncoming motorcyclists. “They drove down an embankment onto a plantation road.” Smit stopped on the side of the road. “The one suspect did not even look at me but fired two shots in my direction. I returned fire,” he said.

Terblanche joined him and together they drove towards a compound to try and cut them off. ” The chopper landed and I got in to help look for them,” he said. “I want to thank all the security companies and BCJ and Fidelity for also assisting with their helicopter. This was good teamwork,” he said. Terblanche said J&M was patrolling the Lydenburg/Sabie Road when they came across the hijacked vehicle. “Our officer contacted the police and ambulance to assist the injured driver,” he said. “We got a call from community members on the Heidel Road who saw the suspects’ vehicle.” Terblanche arrived with the Fidelity operations manager. “We searched the area.” Theron and ACS response manger

Mr Ruan Matthee apprehended one suspect when police spotted him hiding in a river in the plantation. Mr Sandile Gift Maziya (25) appeared in the Nelspruit Magistrate’s Court on Monday. Police are searching for the other suspects. Mediclinic Nelspruit spokesman, Ms Lisa Pillay, said Cronjé was in a stable condition. Anyone who would like to contribute financially towards the Cronjé family,
can contact Ms Chantal Botha on 064-325-2114.

The Kgatelopele Local Municipality in the Northern Cape is urging motorists to…
Beaufort West Mayor, Noel Constable, has urged motorists to continue their stop-overs…