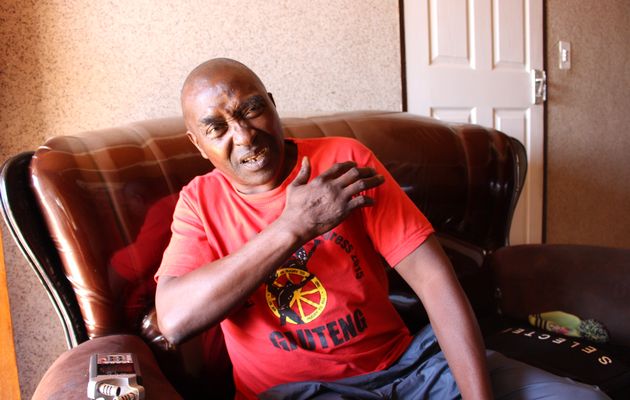 A truck driver is fuming after he says he was called the K-word and physically manhandled by his former employer‚ causing a shoulder injury that requires surgery.

Isaac Mofokeng‚ 59‚ wants to bring a lawsuit for compensation against Phillip van Rensburg‚ from PC van Rensburg Transport on the Vaal. He has also opened a case of assault with the police.

Mofokeng told TMG Digital that his former boss tried to bribe him with R100‚000 and a bakkie to make the case against him disappear.

He is demanding that his former boss compensate him with R2 million.

He explained that he had been working for the company for eight years as a national truck driver. But‚ he said‚ tensions between him and his boss began in 2010 when he became a shop steward.

“Phillip promised me that he’ll destroy my life every time when I represent an employee at the company. In February 2014 he called us (Mofokeng and two colleagues) k****r and I went to open a case at Vanderbijlpark police station. He then paid us R5‚000 to withdraw the case and sign an agreement that we will never talk about it in future because he’ll never do something like that again‚” said Mofokeng.

Mofokeng said that he trusted his boss and signed the “racism” non-disclosure agreement that was presented to him.

“Last year November‚ two employees came to me to assist them with their night allowance that was overdue to them. We got to his office and when I asked about the money he called me a swart goed (black rubbish) that doesn’t appreciate his help and jumped onto me.

“He wrestled me against the wall several times. My left arm is not working properly and my operation will cost me R60‚000 which I don’t have because he fired me early this year‚” said Mofokeng.

A letter of dismissal‚ a copy of which he gave to TMG Digital‚ states that he ignored an ultimatum to resume work‚ which resulted in his sacking on April 19. The company had instituted disciplinary proceedings‚ stating that the last day he had reported for work was March 29‚ that he had failed to inform his employer of the reason for his absence‚ and had failed to submit a medical certificate.

“It’s not that I didn’t want to report on duty. Lomlungu (the boss) has destroyed me as he promised to. How can I report back to work to drive a truck when my entire arm is not functioning? All I want is compensation because I can’t work now. He must give me R2 million and I can see what to do after that. I am busy with my lawyer to sue this man‚” said Mofokeng.

Mofokeng told TMG Digital that on May 25 he will be going to Helen Joseph Hospital for assessment in order to prepare for his operation.

He provided TMG Digital with medical records showing that he had consulted doctors at the time of the alleged assault as well as follow-up visits that confirmed a tendon tear to his shoulder. One doctor‚ who described it as a rotator cuff tear‚ stipulated that Mofokeng could do only light duties pending surgical intervention.

Vanderbijlpark police spokesperson Getrude Makhale confirmed that a case of common assault was opened at the station in November last year. No arrest has been made.

When contacted for comment‚ Van Rensburg said “Sorry no comment”‚ before he could even listen to the allegations made by Mofokeng.

Duban – A compassionate truck driver has been hailed as a wildlife…
Volkswagen plans to launch a new line of trucks in 2021, the…