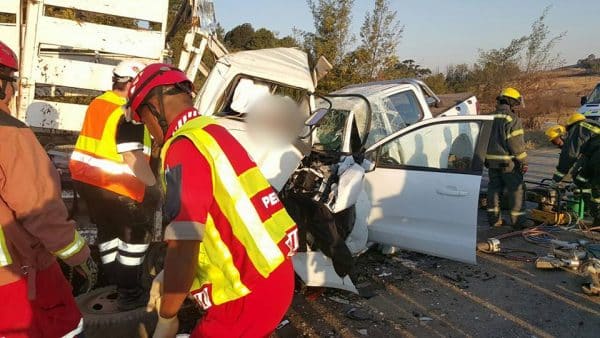 TWO DIE IN TRUCK AND BAKKIE COLLISION IN KZN

Two people died and another person was critically injured on Friday when a truck and bakkie collided head-on on the R617 in Impendle near Boston, Pietermaritzburg, paramedics said.

ER24 spokesperson Werner Vermaak said that paramedics and fire fighters arrived on the accident scene at around 4.30pm and found the two vehicles crushed together.

“Paramedics could only access part of the man’s trapped body. Paramedics and firefighters struggled for almost three hours to free the severely entrapped man from the wreckage. Once freed, paramedics were able to fully assess the extent of his injuries. He was treated on the scene and rushed through to Greys Hospital for further medical care.”

Vermaak said the truck was transporting cows. One of the cows were ejected from the back of the truck and flung over the bakkie and was found lying dead in the road, he said.
The cause for the collision is not known and would be investigated.

Johannesburg – A mangled bicycle lying in the bushes on the roadside…