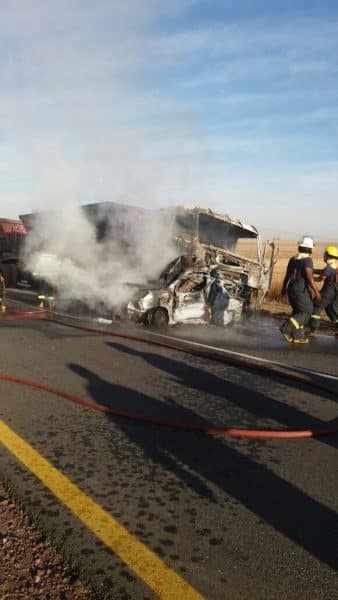 A multiple vehicle collision on the R580 between Kinross and Kriel in Mpumalanga has left two people dead and three others injured.

ER24 paramedics arrived on scene shortly after 07h00 on Friday morning and found that a large coal truck had collided with several other vehicles. One of the vehicles, a bakkie lay smashed against the front of the truck and was engulfed by flames.

Fire services began to extinguish the blaze while paramedics assessed the scene.

The body of a man was found lying inside a second bakkie off into the veld. Paramedics assessed the man and found that he had already succumbed to his multiple fatal injuries. Nothing more could be done for the man and he was declared dead on the scene.

A further three patients were found on scene with injuries ranging from minor to moderate. They were treated by paramedics and thereafter transported to a nearby hospital for further treatment.

Once fire services had extinguished the burning vehicle, they found the body of the driver burned beyond recognition. Nothing could be done for the man and he was declared dead on the scene.

The cause of the incident is not yet known but local authorities were on scene for further investigations.