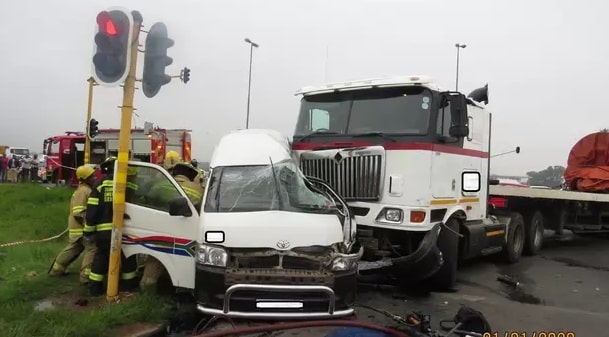 Two people have lost their lives while 11 others sustained injuries when a truck and a minibus taxi collided in Wadeville on Tuesday morning.

The crash happened just after 04h00 at the intersections of R554 and Heidelberg road.

“The truck hit the taxi on the passengers’ side.

On arrival and assessment, three patients were found still trapped inside the taxi wreck.

One front passenger was found to have died, the second patient passed on while cut-out rescue was in progress.

Both patients were declared deceased on the scene by paramedics.

“The other female passenger who had also been trapped was cut out of the taxi, stabilised and taken to hospital,” he said.

“Municipal ambulances and that from private services, transported the casualties to various hospitals around the City. The taxi driver was amongst the casualties and was in stable conditions.

“City of Ekurhuleni traffics officials were on scene and started with investigations. Forensic Pathology officials also removed the deceased to an appropriate facility.

Ntladi said the truck driver was the only one who escaped with minor injuries.

“There were 13 people in the taxi including the driver.

The taxi was coming from Zonkizizwe and going to Germiston.

The driver of the truck was the only passenger in his vehicle.

He was carrying metal sheets and he was travelling in the easterly direction when he crashed into the taxi.” he added.