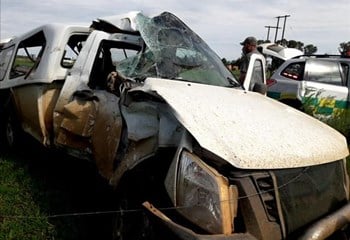 Free State – Two people have been killed and another injured in an accident between a freight train and an Isuzu Bakkie outside Kroonstad.

Free State Emergency Medical Services spokesperson, Sipho Towa, reveals one other person sustained moderate injuries and was taken to the nearby Boitumelo Regional Hospital in Kroonstad for further treatment.

While there have been a number of road accidents reported on the country’s roads, Transport Minister, Fikile Mbalula is reported to have said there is a 10% reduction in the number of fatalities on South Africa’s roads during the festive season thus far compared to 2018.

On Sunday one person lost their life and two others were left in a critical condition following a multi-vehicle accident on the N1 near the small Free State town of Koppies.

While in the early hours of Christmas, one person was declared dead after a minibus taxi crashed on the N3 between Harrismith and Warden in the same province, while travelling from Mpumalanga to the Eastern Cape. Mbalula urges motorists to exercise extra caution.