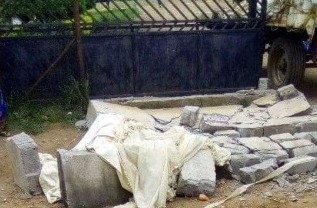 Limpopo – Two pupils at Lekgolo Primary School were killed and two others injured on Wednesday when a delivery truck crashed into a perimeter wall, causing it to collapse on them.

The incident happened at Lekgolo Primary School, in the Mopani East district of Limpopo.

“Initial reports indicate that a truck coming to deliver food items crashed into the school wall, which collapsed and fell on top of learners, who passed away,” said the department.

“Two other learners are seriously injured and have been taken to Kgapane Hospital.

“The department’s psycho-social unit has been dispatched to start with the work of providing the necessary trauma counselling of learners, educators, support staff and the bereaved families.”

Provincial education MEC Polly Boshielo said she was “deeply saddened” by the news and was on her way to the school on Wednesday afternoon.

Two pupils of Lekgolo Primary School in Mamaila Kolobetona (Sekgosese) died this morning after a truck which was delivering food at school knocked off the gate wall and fell on them. pic.twitter.com/5bMnYWPWJi