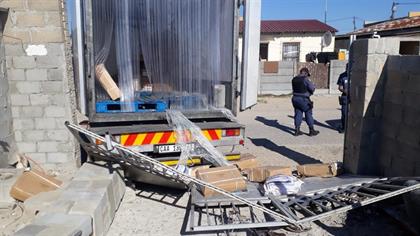 Two men have been arrested after a truck loaded with chicken was hijacked on Monwood drive, in Browns Farm, Cape Town.

She said a third suspect was also arrested for attacking police after the members were pelted with stones.

Rwexana said the suspects aged between 17 and 28 are scheduled for a court appearance soon for the possession of stolen property and attack on police.

Mlungisi Mqikela, a 45-year-old resident, said when they heard about the hijacked truck with chicken boxes they never thought they will see people with those boxes.

“We work with SAPS to end crime and the best way to do that is by reporting any criminal activities happening in our areas”, said Mqikela.

Another resident, Ayabulela Duze, (36) said seeing criminals being arrested for breaking the law gives them hope.

“This will also teach young people who want to be involved in bad things that they will end in jail,” said Duze.

He said that if the community members can stop buying stolen goods the criminals will stop robbing or hijacking people.

“They are involved in crime because they know there are people who will support them, if we can report them instead of supporting them our communities can be a better place”, said Duze.

He said SAPS should continue doing a good job.

“They respond early, that alone shows they are serious about ending crimes and putting bad guys behind bars, if they continue doing like this then we will continue reporting crime every time we see something suspicious”, said Duze.