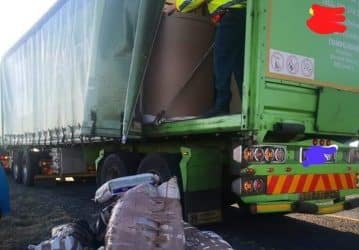 Two truck drivers were arrested on N1 in Beaufort West for transporting 32 bags of dagga with an estimated street value of R640 000.

The two suspects, aged 29 and 32, were on a trip that started in Durban to Cape Town but it could not be immediately established where the illegal load was uplifted from.

Both suspects are Zimbabwean nationals working for a Durban based trucking company.

The suspects were taken into custody at the Beaufort West police station and will soon appear in court.

This is not the first time truckers have been in trouble for transporting dagga.

Another driver was arrested some time ago after bags of dagga fell from his truck after he got involved in an accident.

Police found bags of dagga all over the scene of the accident.

If trucks could talk….. A Poem about man’s relationship to machine or…