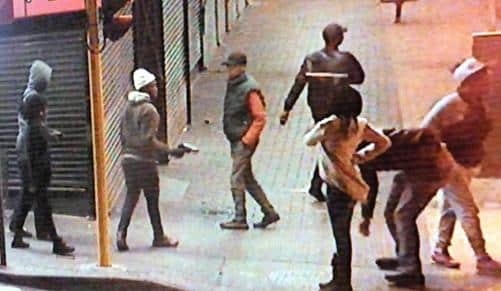 Unsuspecting robbers caught in the act by CCTV in Pretoria

Pretoria – Five teenagers roam the streets of Pretoria city centre at about 1.30am on Sunday in a white Toyota Avanza. After doing their rounds, their car stops and parks near the intersection of Lillian Ngoyi and Francis Baard streets.

Smile, you’re on candid camera: muggers caught in the act, one with a gun, at the intersection of Lillian Ngoyi and Francis Baard streets. They were robbing people of their belongings, including cellphones and wallets.

The CCTV system at the control room of Morubisi Technologies captures four of them jumping out of the car and casually hanging around the intersection.

In a split second, one of them removes the licence plate off the Avanza, and they start looking around for victims.

They are accosted by the four, who are by then armed with two guns. One of the women in particular is visibly terrified as one of the attackers waves a gun in her face.

Within a few seconds, the group is stripped of cellphones and valuable possessions.

Shortly afterwards, the four jump into the Avanza and disappear from the scene.

But their reign of terror doesn’t end there: and all is captured on cameras installed in and around the city centre by the City of Tshwane’s CCTV service provider.

The Avanza is picked up by another camera near the intersection of Paul Kruger and Madiba streets. They hit again, pouncing on a man walking down the street.

One of them jumps out the car with a gun and approaches the man walking in Madiba Street. It’s not clear from the footage what they take from him.

However, at that moment their luck runs out when they are apprehended by officers in two Tshwane Metro Police Department cars, followed by three SAPS vans.

Police confiscated the two guns, ammunition and a panga from the gang. They are not the only gang to face the music after being captured on CCTV.

Four men believed to be contracted to Telkom and driving in a marked truck are also caught red-handed by the tactical response team, stealing copper cable near the intersection of Stanza Bopape and Festival streets.

The four are dressed in blue and brown overalls, and are captured pulling out a copper cable out of a manhole. The copper cable is believed to be worth R250 000.

The men casually pull out the cable as if they have been assigned on a job, while passers-by pay them no mind.

As the camera rolls, the response unit from Morubisi pounces on them. The response team then demands to see their job card and assignment letter, which they could not provide.

Their managers and SAPS are called to the scene and the men are arrested and charged.

Surveillance cameras have been adopted by the municipality as one of the strategic instruments in the fight against crime and to improve the free flow of traffic.

Crimes such as housebreakings, street hijackings and muggings, as well as some traffic offences, have been reduced significantly since the installation of the cameras.

A man has been fined R40000 and had his license revoked, after…