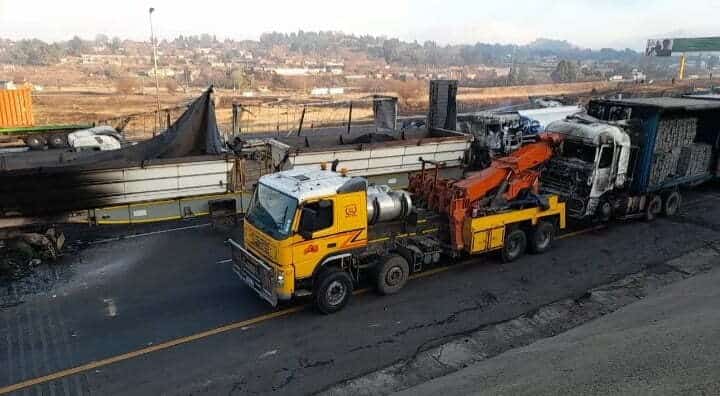 Update: N2 and N3 highways brought to a standstill in #FreeJacobZuma protests – videos

Durban – The N2 and N3 highways were brought to a standstill by the #FreeJacobZuma protesters vowing to #ShutdownKZN over the imprisonment of former South African president Jacob Zuma.

On the N3, five trucks were set alight in Mooi River near the toll plaza in the KwaZulu-Natal Midlands.

This is the latest in a series of sporadic protests that are taking place across the province.

KwaZulu-Natal police could not confirm that the protest action is linked to sentiments from pro-Zuma supporters.

However, former president Jacob Zuma’s daughter Duduzile Zuma-Sambudla, took to social media on Friday to say the protesters were supporters of her father.

Operations Manager at the N3 Toll Concession, Thania Dhoogra, has confirmed reports that three trucks have been set alight on the northbound carriageway and two more trucks are on fire south of Mooi River Toll Plaza.

“There have also been reports of gunshots, tyres being burnt and stone throwing in the area. Law enforcement is making every effort to bring the situation under control and restore calm in the area. Please contact the 24 hour N3 toll helpline on 0800 634357 to report any emergencies whilst travelling on the N3 toll route,” adds Dhoogra

This morning, Saturday 10 July, authorities are busy cleaning up the trucks debris on N3. The highway is at a standstill as the clean up progresses.

There were unconfirmed reports of a truck burning on the N2 at uMgababa.

In Eshowe, several trucks have been used to block the R66.

The RTI has closed the N3 highway in the vicinity of Howick due to the protest.

The R56 between Richmond and Ixopo is blocked by burning tyres.

N2 between Mtunzini tollgate and Dokodweni on the southbound lane is blocked by protesters.

SAPS Eshowe and Gingindlovu officers on the scene confirmed the blockade.

N2 northbound just before the Spaghetti junction near Chesterville there are burning tyres on the road.

In Hluhluwe, there is a lot of police officers on the N2 where six trucks were reportedly burnt. Only cars are being allowed to pass around the debris while trucks are stacked on the scene.

The R603 in illovo is completely blocked to traffic due to the protest.

Durban – Following a warning by the South African Weather Service of…