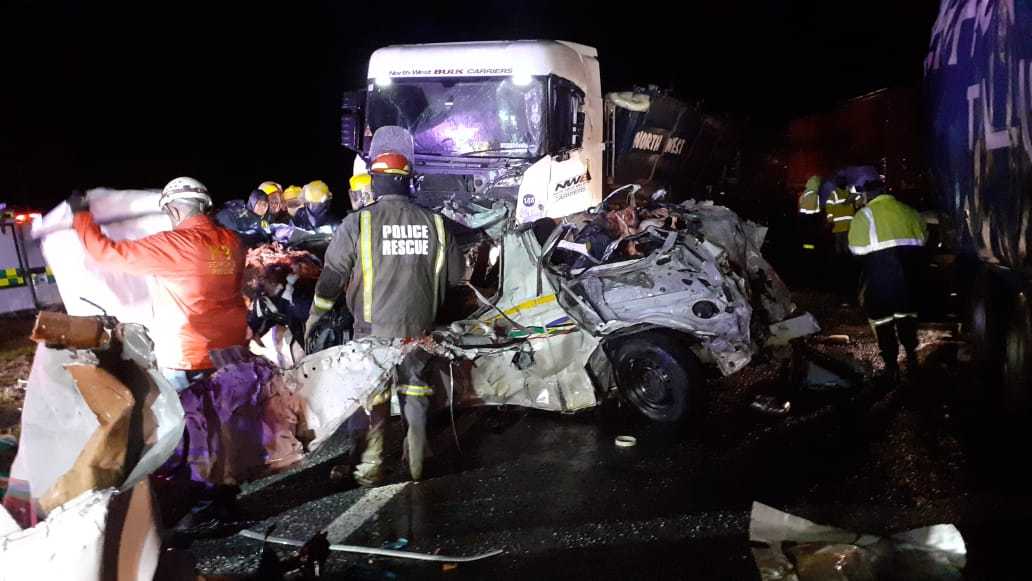 Durban – Transport Minister Fikile Mbalula has confirmed that 14 people died on Monday evening when their taxi got wedged in between two trucks in a massive pile-up crash.

Only one person survived from the taxi, the patient was taken to hospital in a critical state.

“Preliminary reports indicate that the minibus taxi was travelling in between two trucks and became wedged between the trucks after the truck in front of the taxi jack-knifed,” said Mbalula.

Mbalula welcomed the swift response of the KwaZulu-Natal government after the fatal crash which took place on the N3 Highway in Escourt.

“KwaZulu-Natal MEC for Transport, Community Safety and Liaison Bheki Ntuli has called for an urgent meeting with the freight industry, to discuss the collision, which claimed the lives of 14 people.”

READ | 14 killed in collision between 2 trucks and a minibus taxi
He said the 14 fatalities, which include the taxi driver, were all from the minibus. One survivor was taken to hospital in a critical condition.

“Both truck drivers survived the accident.”

Mbalula also welcomed the prompt commencement of investigations by the Road Traffic Management Corporation and the South African Police Service.

“It is important that we get to the bottom of the factors which contributed to this tragic loss of life. Not only for the sake of bringing closure to those who have lost their loved ones, but also as a way of preventing similar carnage in future,” he said.

He said investigations into the cause of the crash would focus on the roadworthiness of all vehicles involved, the weather condition at the time of the accident, and other causal factors.

Mbalula called for “extreme caution on the roads as South Africa edges closer to the festive season”.

“We urge all road users to remain vigilant, rest often during long distance travel, keep a safe following distance in adverse weather conditions, refrain from driving under the influence of alcohol and adhere to the speed limit.”

He sent his condolences to the friends and family members of the deceased and wished the injured a full recovery.

Five people, four police officers and a civilian, died when the double…