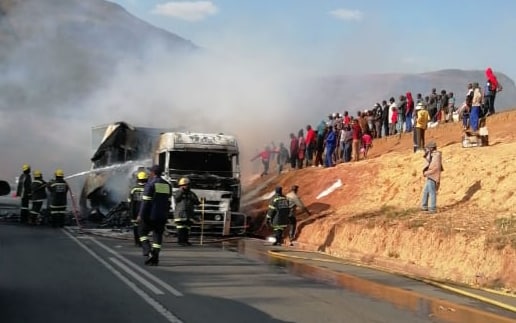 Durban – A KwaZulu-Natal truck driver was killed in yet another brutal attack in the province on Monday.

The driver, identified as Charles Ntini, 37, who is a Zimbabwean national, was found dead a few metres away from his burning truck on the N2 Main Harding road in Paddock, in southern KZN.

“On August 19 2019 at 12:10, police received a call regarding a truck which was on fire on the N2 Main Harding road in Paddock. Upon arrival at the scene, police found the driver lying on the road near the driver’s door. He had bullet wounds in the left arm and chest and had burn injuries to his body. The 37-year-old driver was declared dead on the scene.”

Mbele said the motive was unknown and the task team would investigate further.

SNB Freight were approached for comment but declined, saying the matter was sensitive.

The attackers are not known and noone has been arrested yet.

The attack comes at the backdrop of an onslaught against companies employing foreign truck drivers which had left dozens dead or injured and caused R1.2bn in damage to trucks and cargo, according to the Road Freight Association (RFA).

The RFA said 213 truck drivers were killed in the past year. However, it is still unclear how many of these deaths were linked to the protests. However, it confirmed that 12 foreigners had been killed in the violence as well as at least three South Africans.

SA Trucker shared a video of the burning truck on Monday which have since gone viral online.

Two truck drivers ran for dear life after four men allegedly blocked…
The N10 highway is blocked at the Olifantskop Pass after a side…
The N3 highway near the Market Road off-ramp in Pietermaritzburg, KwaZulu-Natal was…