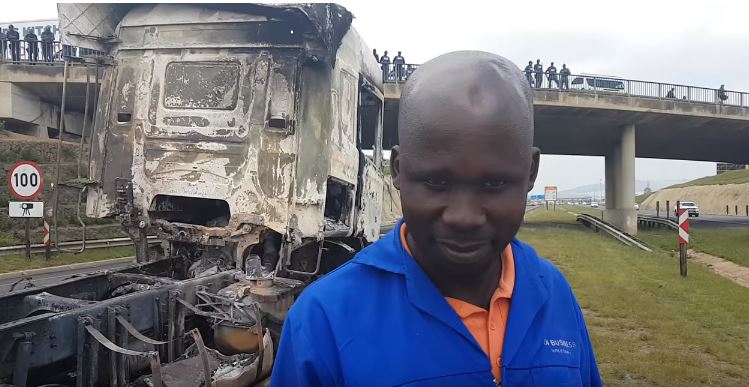 Video: Police save driver from a fiery death at hands of the Mooi River mob

A truck driver have survived to tell the story after police arrived just seconds before he could be set alight together with his truck during the Mooi River protests.

They had already poured petrol on his body and the back trailer was alight, he had tried to run but the rowdy crowd caught up with him and pushed him into his truck, all because the crowd thought he was a foreign national.

Apparently the mayhem that saw the busy N3 freeway, R603 and R103 closed to traffic was initially targeted on trucking companies allegedly employing foreign nationals thereby denying locals a fair chance of getting jobs. A report in a local publication, Ladysmith Gazette, reported earlier that trucks which were burnt belonged to companies which hired foreign nationals only.

Many trucks were burnt and looted during the mayhem and traffic was severely affected as many holiday goers headed back to Gauteng.

The driver’s account of how he has the police to thank for saving him was filmed by Patrick O’Leary and shared on Fleetwatch YouTube channel.

Durban – Police managed to avert a potential catastrophe after a fuel…

This website uses cookies to improve your experience while you navigate through the website. Out of these, the cookies that are categorized as necessary are stored on your browser as they are essential for the working of basic functionalities of the website. We also use third-party cookies that help us analyze and understand how you use this website. These cookies will be stored in your browser only with your consent. You also have the option to opt-out of these cookies. But opting out of some of these cookies may affect your browsing experience.
Necessary Always Enabled
Necessary cookies are absolutely essential for the website to function properly. These cookies ensure basic functionalities and security features of the website, anonymously.
Functional
Functional cookies help to perform certain functionalities like sharing the content of the website on social media platforms, collect feedbacks, and other third-party features.
Performance
Performance cookies are used to understand and analyze the key performance indexes of the website which helps in delivering a better user experience for the visitors.
Analytics
Analytical cookies are used to understand how visitors interact with the website. These cookies help provide information on metrics the number of visitors, bounce rate, traffic source, etc.
Advertisement
Advertisement cookies are used to provide visitors with relevant ads and marketing campaigns. These cookies track visitors across websites and collect information to provide customized ads.
Others
Other uncategorized cookies are those that are being analyzed and have not been classified into a category as yet.
SAVE & ACCEPT
Total
39
Share
39
0
0
0
0