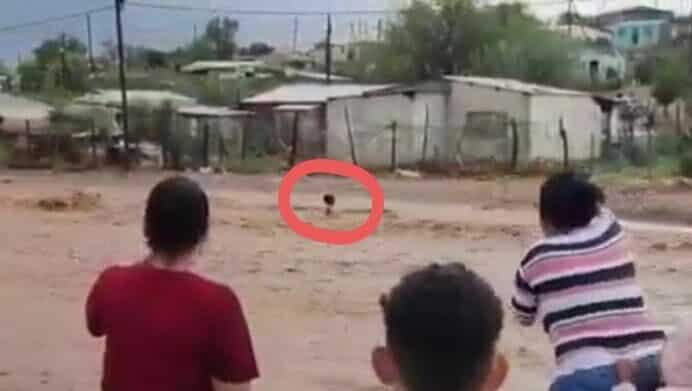 An Oudtshoorn man has become an instant local hero after he rescued a woman from a raging stream in the Western Cape town on Sunday.

In a 30 second video shared on social media, several people can be heard helplessly screaming and shouting as the raging waters race the woman downstream.

A man standing on the other side of the river comes closer to the stream after noticing where the water is taking the woman.

As she nears he jumps into the water, grab and pull her out of the water, much to the relief of onlookers.

The Western Cape has been hit by heavy rains and winds resulting in flash floods, road closures and damage to houses.

“Several houses roofs were blown off and trees blown over. Some parts were left without electricity,” he said.

“One person got swept away after crossing a flooded low-water bridge, but was successfully rescued,” Deiner said, confirming the incident.

There have been several road closures, including Meiringspoort – which was still not open on Monday morning – and Swartberg Pass.

In George, several road closures were in place on Monday morning, with the municipality advising residents to stay at home if possible.

“Heavy rainfall this morning (48mm) has resulted in a number of roads throughout George being underwater. Residents are requested to please either stay off the roads or proceed with the utmost caution,” the municipality said in a statement.

More rainfall is expected throughout the day.

The South African Weather Service has released an orange warning for flooding in areas along the Garden Route, in the Klein Karoo and Overberg on Monday.

“Flooding of roads, settlements and low-lying areas, resulting in the closure of some bridges and roads can be expected. Damage to infrastructure and settlements due to gusty winds and heavy downpours can be expected, along with disruption to essential services.

Durban – One suspected robber has been shot dead outside a mall…