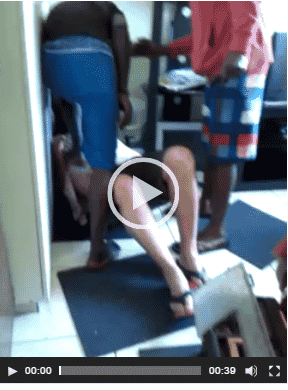 Truck drivers are known to work long hours and sometimes not coming home for lengthy periods. This, a church elder from Grace Life Ministries, has learnt the hard way that it is not the best of ideas to try and fool with their wives.

John Dreyer, the church elder and well respected member of the community thought it was good idea to try and fill up the gap left by the Zimbabwean truck driver only known as Liberty, so he hatched a plan to try and get his hand into the pot of gold. After one of the church cell meetings he offered to come and pray with Liberty’s wife and she accepted. He came once when Liberty was there, shared a prayer and the holy word and off in peace he left.

A faithful Liberty’s wife was forced to tell her husband that John is pressing to come to pray for her again and she was not comfortable with it, this after she had learnt that the married man of the cloth had developed a habit of picking up ladies, married or unmarried from his church and even some from the streets and bedding them.

The husband instructed her wife to play along until they could get valuable evidence to shame the man of cloth and educate others.

At one occasion, John asks the lady to send him nud3 photos to which she tells him that her camera was dysfunctional and John promised to bless her with a cellphone with a working camera before he himself sent her a lot of photographs of his manhood. All this was done under the watchful eye of Liberty, the husband.

On the fateful day that Elder  John met his fate, he asked the wife if he would meet her at her house because his wife was sick and had not gone to work that day. Liberty then connived with his wife and told John to come through as the “coast was clear”. The h0rny clergyman made his way to Liberty’s flat in Bluff, Durban with a cake, a cellphone (samsung e250 in hand} and some condoms. He had promised Liberty’s wife a good time of passionate interc0urse.

Lo and behold, John’s entrance into Liberty’s flat was met with a hot clap from the incensed husband who immediately meted instant fist justice on the defenseless elder. All this was happening on camera as the wife was recording  the ordeal for proof later.

So severe was the beating and hot claps that John lost a tooth from the ordeal and in the video, an enraged Liberty even breaks a glass as he delivers one of the many punches that met John’s face.

It could not be verified when exactly in the past month of May, this happened.

N3 East near Shongweni off ramp

How much money truck drivers earn in South Africa