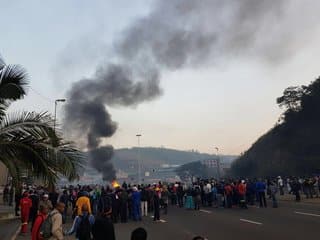 The new work week has gotten off to a chaotic start for motorists in Durban this morning. Check out pictures and videos sent in by motorists of the protest action here.

Several key routes have been closed as a result of protests in the the city.

The M19 between Westville and the Quarry Road bridge has been closed in both directions.

The N2 between Queen Nandi Drive and Inanda Road has been re-opened, while motorists can also use the R102 in the Hambanathi area – near Tongaat Home Affairs again.

The chaos it’s alleged is coming from residents who say they have not been given a chance to choose who to represent them in the coming municipal elections. There is talk of some ANC counsellors who are not wanted by the residents and they are promising more chaos if their demands are not met.

Here you can see in video and pictures of what transpired.