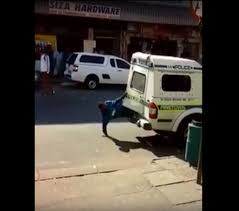 The footage, which has gone viral on social media, shows two men pushing open the back of a police van and making their escape in full view of the public.

The two had been arrested for carrying dangerous weapons.

Kaunda says if police are found to have been negligent, action will be taken and if a member of the community had helped the suspects, the law should take its course.

He says he’s disturbed at the behaviour of some members of the public who were watching the incident.

Navy veteran Joe Calderazzo and a female friend, who had just returned…