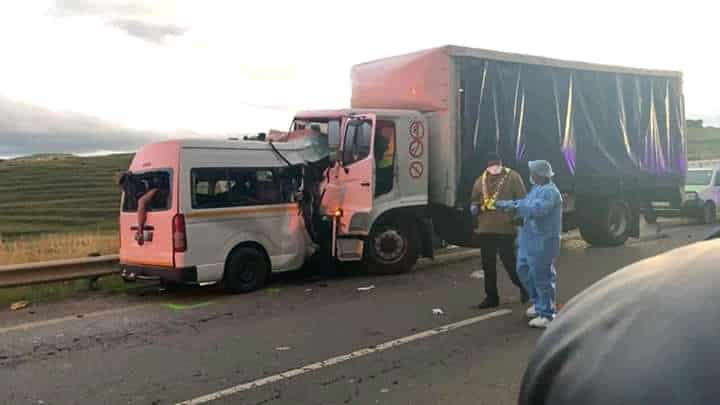 The death toll in the fatal head-on crash between a minibus taxi and a trucķ has risen to fifteen after four people who were serously injured succumbed to their injuries last night.

Eastern Cape Transport department said they will probe whether the national lockdown regulations relating to the ferrying of passengers were flouted after the death of the 15 people on Wednesday.

The regulations stipulate that minibus taxis can only carry 70% of passengers per trip from 5 am to 10 am and also from 4 pm until 8 pm.

The crash happened on the N2 between Mt Ayliff and Mt Frere. All the deceased were occupants in the taxi traveling to Mt Frere.

The truck driver and his passenger were taken to the hospital with serious injuries.

“The MEC has also expressed deep disappointment at the gross violation of the National Disaster Act as the taxi had 15 passengers, something that should not have happened. She has called on law enforcement to leave no stone unturned in investigating the case and ensuring the rules are upheld at all times,” says Binqose.

A total of 15 people have died and 2 others have been seriously injured in a collision between a truck and a minibus taxi in the Eastern Cape. https://t.co/nQgQ5VQOdl pic.twitter.com/kzhrfo4lzt

This website uses cookies to improve your experience while you navigate through the website. Out of these, the cookies that are categorized as necessary are stored on your browser as they are essential for the working of basic functionalities of the website. We also use third-party cookies that help us analyze and understand how you use this website. These cookies will be stored in your browser only with your consent. You also have the option to opt-out of these cookies. But opting out of some of these cookies may affect your browsing experience.
Necessary Always Enabled
Necessary cookies are absolutely essential for the website to function properly. These cookies ensure basic functionalities and security features of the website, anonymously.
Functional
Functional cookies help to perform certain functionalities like sharing the content of the website on social media platforms, collect feedbacks, and other third-party features.
Performance
Performance cookies are used to understand and analyze the key performance indexes of the website which helps in delivering a better user experience for the visitors.
Analytics
Analytical cookies are used to understand how visitors interact with the website. These cookies help provide information on metrics the number of visitors, bounce rate, traffic source, etc.
Advertisement
Advertisement cookies are used to provide visitors with relevant ads and marketing campaigns. These cookies track visitors across websites and collect information to provide customized ads.
Others
Other uncategorized cookies are those that are being analyzed and have not been classified into a category as yet.
SAVE & ACCEPT
Total
61
Share
61
0
0
0
0