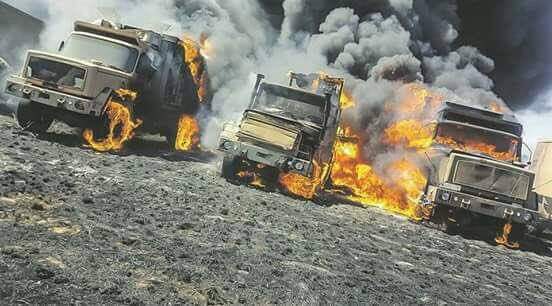 Over 200 military trucks, trailers, Nyalas and other military equipment burned to the ground when a veld fire tore through the military’s Wallmansthal vehicle depot, north of Pretoria.

According to the Sinoville Firefighting Association, which was first on the scene, the fire broke out just before 7pm on Thursday.

“An officer from the army base called to say the base was on fire, and the section where they park vehicles, and they needed our assistance very urgently. We immediately dispatched members with a fire engine, and they arrived there at about 7.15pm,” said association chairperson JP Botha.

The team was later joined by the Apies River rural fire protection association, and they battled the blaze until about 1am.

“The vehicles are still burning this afternoon,” Botha said on Friday.

“This is a tragedy if you look at how many vehicles were burnt. We brought the fire under control in the early hours of Friday but we have left the vehicles to burn until they burn out. They are not posing any threat to human life.”

“We had an inspection there for our internal report, and the army is busy counting. It’s a disaster. A lot of equipment was damaged in this fire” he said.

It is suspected a fire that broke out near an informal settlement and spread to the army base, resulting in some vehicles catching fire.

The wind was blowing at about 31km/h and the fire danger index was 76, which is considered very dangerous. No buildings were burnt and there was no danger to human life.

This is not the first time there has been a significant fire at the base.

In 2017 that at least 83 unused military vehicles were destroyed during a fire prevention exercise when the wind unexpectedly picked up.

A board of inquiry was instituted to investigate the cause of the fire. The military said at the time the vehicles were unused and kept for spares.

Military spokesperson Brig-Gen Mafi Mgobozi had not responded to questions sent to him by the time of publishing.