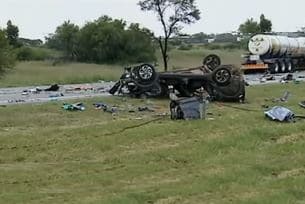 Six people were killed in a collision between a private car and a truck on N1 north at the Petro port just after Pretoria.

Three of the deceased are children.

It is believed that the private vehicle lost control and crashed into the truck travelling in the opposite direction.

Six people from the car who are believed to be from the same family perished on the scene.

The driver of the truck was unharmed in the collision.

“Six family members from the SUV died in the horrific crash and we appeal to any member of the public who may have witnessed the accident to come up and help with information of how the accident happened,” Mahamba added.

Meanwhile another head-on collision between a bus and a sedan in Northern Cape claimed the lives of both drivers.

The bus carrying ANC members from the 108 birthday celebration in Kimberley, Northern Cape collided head-on with a sedan which subsequently caught fire on the N14 near Kalksloot on Saturday night.

“The bus was en route to Namakwa and was involved in an accident with another vehicle about 15km out of Upington on the N14 near Kalksloot. The driver of the vehicle was killed instantly,” ANC spokesperson Pule Mabe said in a statement on Sunday.

Seven passengers, including the driver, were injured and taken to a nearby hospital for further medical care. The driver died in hospital.

The African National Congress (ANC) offered its condolences to the driver’s family.