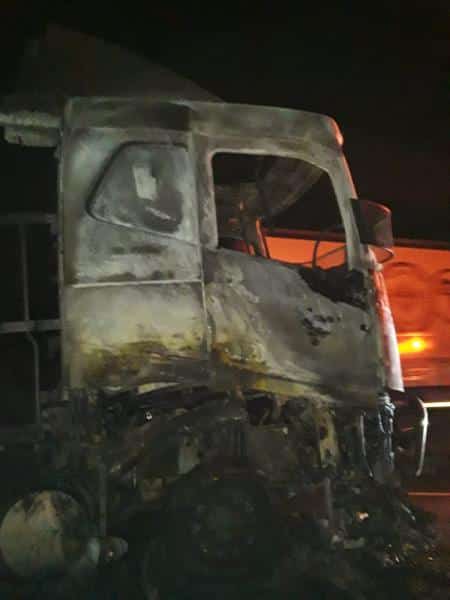 While truck owners dream to see the end to the burning of their trucks on the N3, the attackers have deviced another way to actually cause more harm and effectively make sure they achieve their goal.

Stop the truck at all costs, loot and burn, that’s their mission.

In the process they don’t care how much damage they cause to the trucking industry, families of the drivers and ultimately the economy of the country.

While the torching of trucks have initially been suspected to have been started by All Truck Drivers Foundation (ATDF), the pattern however, has changed and points to criminal elements bent on reaping were they didn’t sow.

ATDF has been urging the government to act against illegal immigrants who are according to them taking away jobs mearnt for locals.

ATDF leader, Sipho Zungu, has however denied that his organization instructed its members to burn trucks.

They claim that the local trucking industry has been taken over by mainly illegal foreign drivers.

SA Trucker spoke to the driver who got attacked in the early hours of the morning who narrated how the attackers successfully carried out their evil plot.

“I was driving towards the Tweedie interchange on N3 coming from Durban side when I noticed something on the road, when I flashed my lights to enhance my sight, simultaneously a fire ball engulfed the whole roadway. Knowing what happened over the weekend at the same spot I realised I had been targetted,” he said.

“I abruptly stopped the truck and ran away with my life,” added the driver whose name SA Trucker has but will not release at this stage.

After abandoning the truck the attackers pounced and looted whatever they could including the fridge mechanism for the reefer he was loaded with.

In what has become their signature move the thugs burnt the truck, destroying it completely.

He suspects the attackers sprinkled petrol onto the tyres and lit them up just when he was approaching.

Recently the attackers have used boulders to block motorists and then pounce.

In other cases they have thrown stones from over pass bridges. A Time Link Cargo truck driver died after he was attacked in that way.

The trucker has urged all SA Truckers to shine their bright lights when they approach hotspots like what this area has become. This according to him would increase the driver’s sight to give him time to spot danger and act accordingly.

He urges truckers to be alert around areas around Tweedie interchange and Mooi River including at all overhead bridges on N3.

This website uses cookies to improve your experience while you navigate through the website. Out of these, the cookies that are categorized as necessary are stored on your browser as they are essential for the working of basic functionalities of the website. We also use third-party cookies that help us analyze and understand how you use this website. These cookies will be stored in your browser only with your consent. You also have the option to opt-out of these cookies. But opting out of some of these cookies may affect your browsing experience.
Necessary Always Enabled
Necessary cookies are absolutely essential for the website to function properly. These cookies ensure basic functionalities and security features of the website, anonymously.
Functional
Functional cookies help to perform certain functionalities like sharing the content of the website on social media platforms, collect feedbacks, and other third-party features.
Performance
Performance cookies are used to understand and analyze the key performance indexes of the website which helps in delivering a better user experience for the visitors.
Analytics
Analytical cookies are used to understand how visitors interact with the website. These cookies help provide information on metrics the number of visitors, bounce rate, traffic source, etc.
Advertisement
Advertisement cookies are used to provide visitors with relevant ads and marketing campaigns. These cookies track visitors across websites and collect information to provide customized ads.
Others
Other uncategorized cookies are those that are being analyzed and have not been classified into a category as yet.
SAVE & ACCEPT
Total
103
Share
103
0
0
0
0