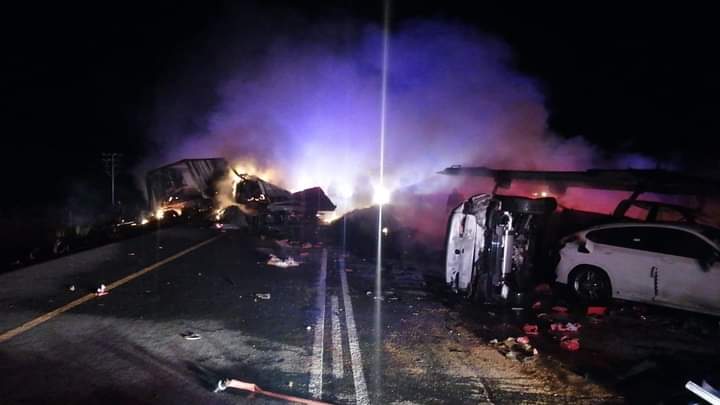 Beaufort West – Two truck drivers sadly lost their lives on Tuesday night when their trucks collided head-on on the N1 near Leeu Gamka in the Karoo.

One of the trucks burst into flames on impact and also set alight luxury vehicles which were being transported by the other truck.

It is believed the two trucks collided head-on.

Western Cape Traffic spokesperson Jandre Bakker said that two people were killed in the collision that happened between Beaufort West and Leeu Gamka in the Karoo.

There were no survivors in the crash.

The N1 highway was closed for hours from just before 21h00 when the accident happened until today Wednesday late afternoon.

Bakker said rescue teams searched through the wreckage of one vehicles that had burnt out but could not find any bodies.

By midday, traffic was being directed in both directions past the scene, after the highway was closed.

Several luxurious vehicles were either burnt or damaged in the collision.

Watch the video of the aftermath of the fatal truck crash below;

EC – One person was killed and 22 others injured when an…