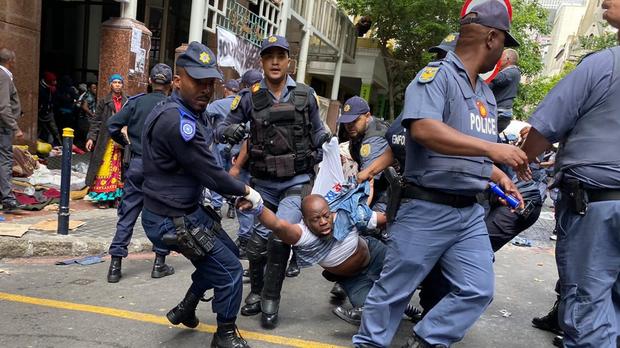 Cape Town – Crying children, and foreign nationals being dragged by police were seen on Wednesday after chaos erupted outside the UN High Commissioner for Refugees (UNHCR) offices at Waldorf Arcade.

Chanting “we want to go home” the refugees blockaded the entrances of the mall forcing the police to use water and to disperse the crowd.

The clash between police and the protesters comes after a court order was granted on October 18 at the Cape Town Magistrate’s Court following an application by the building landlord to evict the group.

More than 5000 refugees and asylum seekers have been camping at the UN offices demanding the agency to take them out of the country, as they felt unsafe.

The protest by the asylum-seekers has been ongoing and gaining momentum ever since it began nearly four weeks ago.

Earlier this week safety and security mayoral member JP Smith said the matter was completely in the hands of SAPS and the Department Of Home Affairs.

“The owner of the property there has applied for a court interdict the interdict will likely be effected at some point by the South African Police,” he said.

Activist Zackie Achmat who was on the scene said that they are looking for children who have reportedly gone missing and that he saw a doctor being chased away from helping a woman in distress.

Police spokesperson Novela Potelwa said members of the public order police have taken action against people embarking on a sit-in protest at the Waldorf building in Cape Town.

“About one hundred people have been arrested after they failed to heed the call to disperse. The police are in the area to support the sheriff in executing a court order to evict about 300 refugees and asylum seekers who have been occupying the building in a sit-in protest for quite some time,” she said.

Potelwa said the police in the Western Cape were aware of earlier efforts to engage the group facilitated by role players such as the UNHCR to resolve the impasse in an amicable manner.

“Unfortunately the attempts yielded no positive result. With a court order in place, the SAPS is obligated to support its execution by the sheriff. Law enforcement officials from the City of Cape Town and the police’s Public Order Police are henceforth on site,” Potelwa said.

“As part of the execution of the court order, taking into account the size of the group, officials from the departments of Social Development and Home Affairs are also present to offer technical support to the situation,” she added.

Police and Refugees clash outside the UNHRC offices in Cape Town @TimesLIVE pic.twitter.com/LbKz68OQri

She said the UNHCR was working closely with the South African authorities to continue providing protection through the issuance of appropriate identity documentation, facilitating access to healthcare, education and employment opportunities.

Caux said South Africa was hosting almost 268 000 refugees and asylum seekers, mainly from Somalia, the Democratic Republic of the Congo and Ethiopia.