A video of a road rage incident has surfaced online, where a truck driver captured his own dangerous driving as he tries to overtake another truck.

The undated video, seemingly shot by the trucker, shows him trailing behind another truck. Diregarding the continous solid line, he tries to overtake the truck in front of him.

The truck in front accelerates forcing him to retreat.

Again the trucker attempts to overtake but this time the truck in front moves over to the right, blocking his passage.

He retreats again and continues driving behind it.

Judging from the events in the video, one can be understood if they believe what we are shown in the video means there was a confrontation earlier.

Unfortunately, at this stage it is not known what caused such behaviour from the two truckers.

It however, presents a good opportunity for others to learn the dangers of road rage.

SA Trucker encourages motorists to keep their calm at all times. It is fact that through another motorist’s mistake or intentional moves you are sometimes bound to get all worked up. However, the most dangerous part of road rage is the retaliation.

If your reaction to a mishap is retaliation then soon enough you will land yourself in grave danger.

Stay calm and drive on!

Please share your views, comments and advice below – many people will learn something. 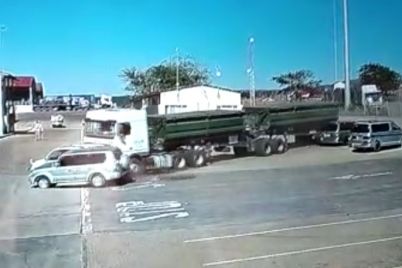 CCTV footage has emerged of a truck crashing into customs officials vehicles at KM 4 in near Maputo, Mozambique. It… 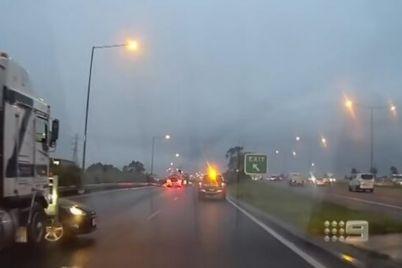 Watch: Insane footage of truck pushing along a car on busy freeway

Video footage has emerged of a truck pushing a small car on a Melbourne freeway. Two witnesses filmed the insane…