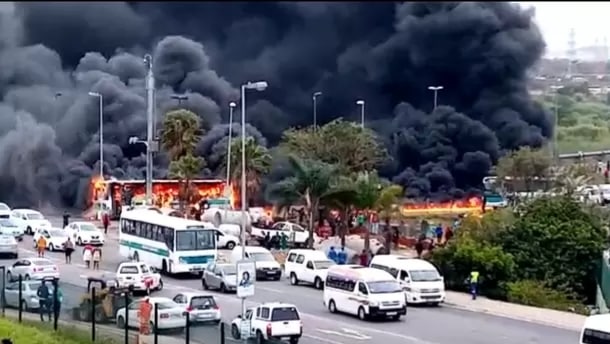 Durban – What caused a Durban municipal buses to catch a light?

This was the question being probed on Wednesday after bystanders captured a dramatic blaze of a Durban Transport buses which burst into flames in uMlazi on Tuesday.

At this stage it is not clear how many buses were on fire. However, from cellphone footage at least two buses are seen engulfed in flames.The incident is said to be under investigation.

A video circulating on social media shows thick black smoke filtering through the atmosphere as at least one Tansat owned bus gets engulfed in smoke on the Mangosuthu Highway near Mega City.

A taxi operator who did not want to be named said he saw one bus burning.

“I don’t know what exactly started the fire. I don’t want to speculate on what caused the fire because this is not a taxi industry issue, but that of the bus industry. The fire, even though it was huge, didn’t cause any disruptions in our operations. We continued with our routine exercise with no glitches,” said the taxi operator.

Moffat Mbonane, general manager at Tansnat Durban, said the fire was under investigation.

“It’s too soon to tell what caused the fire as it happened yesterday. Volvo technicians are involved in the investigation as the fleet was sourced from them,” Mbonane said.

Tansnat is owned by Mandla Gcaba – the nephew of former president Jacob Zuma – and has been operating eThekwini buses for more than a decade on a month-to-month contract.

The city and Tansnat were at odds over the R370million Gcaba owed the city. In an attempt to recover the debt, eThekwini made a liquidation application but the company went to court to challenge the matter.

DURBAN – Key role players in the freight industry are appealing for…

This website uses cookies to improve your experience while you navigate through the website. Out of these, the cookies that are categorized as necessary are stored on your browser as they are essential for the working of basic functionalities of the website. We also use third-party cookies that help us analyze and understand how you use this website. These cookies will be stored in your browser only with your consent. You also have the option to opt-out of these cookies. But opting out of some of these cookies may affect your browsing experience.
Necessary Always Enabled
Necessary cookies are absolutely essential for the website to function properly. These cookies ensure basic functionalities and security features of the website, anonymously.
Functional
Functional cookies help to perform certain functionalities like sharing the content of the website on social media platforms, collect feedbacks, and other third-party features.
Performance
Performance cookies are used to understand and analyze the key performance indexes of the website which helps in delivering a better user experience for the visitors.
Analytics
Analytical cookies are used to understand how visitors interact with the website. These cookies help provide information on metrics the number of visitors, bounce rate, traffic source, etc.
Advertisement
Advertisement cookies are used to provide visitors with relevant ads and marketing campaigns. These cookies track visitors across websites and collect information to provide customized ads.
Others
Other uncategorized cookies are those that are being analyzed and have not been classified into a category as yet.
SAVE & ACCEPT
Total
1K
Share
1K
0
0
0
0