Video footage of a high speed chase between a hijacker and the Johannesburg Metro Police Department (JMPD) has emerged online.

JMPD spokesperson Xolani Fihla said that K9 officers received a lookout for a Toyota Fortuner which was hijacked at Impala Road near the N12 in Protea Glen.

“Whilst patrolling, officers spotted the Fortuner on the N12 with one occupant.

Officers stopped the vehicle, but instead of stopping the driver sped off, driving recklessly trying to ram the police vehicle off the Freeway. Shots were fired and the driver lost control, crashing into a palisade fence of a business premises on Boundary Road in Oakdene,” said Fihla.

Fantastic job done by #JMPD K9 officers who arrested 1x suspect in Oakdene for the possession of a hijacked Toyota Fortuner. This is following a high speed chase on the N12, with the suspect trying to ram the officers vehicle off the road. The vehicle was hijacked in Protea Glen pic.twitter.com/67tqz2y38n

The suspect jumped out of the vehicle and tried to flee on foot, but he was immediately apprehended.

He was arrested and detained at Moffatview SAPS for the possession of a hijacked motor vehicle and the Toyota Fortuner was booked in at Aeroton SAPS Pound. 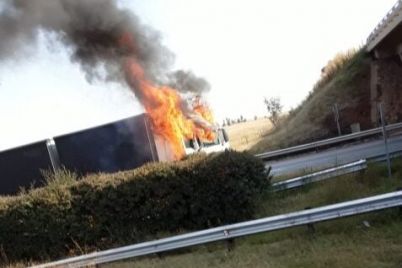 Cape Town – Police are investigating the murder of Time Link Cargo driver Christopher Kgomo, 46, who died after his…