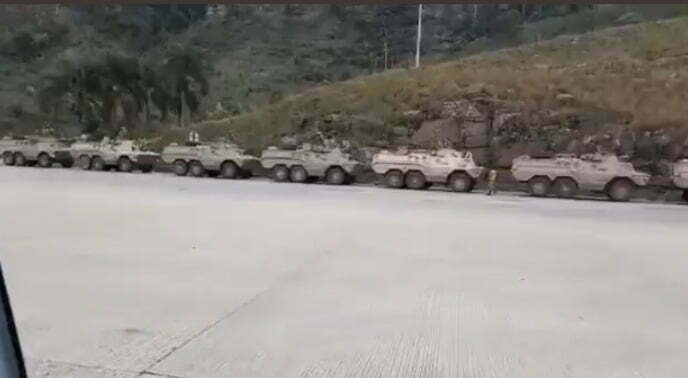 Watch: Heavy army presence in Durban at the eve of mooted 23 August protest

Durban – A huge contingency of army vehicles have been spotted at the Mariannhill tollgate on the N3 on Sunday afternoon.

Another convoy of SANDF trucks was also spotted on the N2 north just after KwaMashu offramp heading north.

Marion hill toll, but ABC says there is no such thing as looting expected pic.twitter.com/qODUNa67a7

This comes at the backdrop of a mooted protest action allegedly by disgruntled ANC members.

ANC in KZN, however, has moved to dismiss its purported involvement in the protest action. This after a poster was shared on social media bearing the ANC logo.

ANC KZN discouraged its members from taking part in a reported planned KZN shutdown on Monday.

The party said that it had learnt through social media of the unrest scheduled to take place on August 23, 2021 and lamented the use of its logo without any consultation with the organisation.

ANC provincial spokesperson Nhlakanipho Ntombela said they were saddened by the misuse of their logo in the planned unrest and condemned the behaviour in the strongest terms.

Ntombela said that the ANC was not aware of the planned shutdown nor had it planned any unrest and that they were seriously aggrieved by the fact that people had the audacity to drag the party’s logo into conduct which had the potential of perpetuating and wreaking havoc in the province.

“The ANC KZN has countless times declared support for former president Jacob Zuma, and we also respect the rights of individuals to peacefully protest using legitimate channels as inscribed in our democratic constitution, however, exercising such right should not infringe on the rights of others or break any laws.

“People should refrain from using the former president Jacob Zuma as a scapegoat for violence, and we urge law enforcement agencies to act firmly and expeditiously, within the law, against any form of lawlessness, public violence, damage to property and disruption of economic activity,” Ntombela said.

He said that the party was not aware of the identities of the individuals behind the use of the ANC’s logo in their poster.

“This is not a party programme, either at a province or at a regional level, we’ve got nothing to do with it, hence we are discouraging our members from participating in it because we don’t know who is behind it,” Ntombela said.

He added that they would not tolerate any of the party’s members taking part in the planned shutdown action and that disciplinary charges would be instigated for those of its members who would be found to be using the ANC banner for this planned unrest.