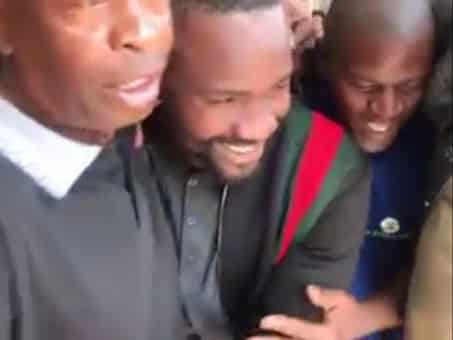 Sam ‘Mshengu’ Chabalala received a hero’s welcome from friends, relatives and employees after he got released on bail on Monday afternoon.

Mshengu who faces charges of corruption, illegal possession of a firearm and ammunition, illegal entry, departing and remaining in the borders of South Africa and providing false information to be granted entry into the country was released on R200 000 bail at the Witbank Magistrate’s court.

Magistrate Mdumiseni Mavuso in passing judgement on the bail application said the state failed to prove that Mshengu was a dangerous individual as stated in opposing papers.

“The state further alleges that he planned the assassination of a witness. This too could not be proved. The court does not have proof that he will assassinate a witness,” Mavuso said.

His matter was postponed to November 22 for further investigation.

Dressed in a Gucci jacket and a black pair of jeans, the 27-year-old appeared relieved and celebrated with his supporters before making his way down into the holding cells.