Watch: Minibus taxi driving around with road sign it crashed into stuck in its face

Some stories are better told in a video rather than seeing pictures or listen to someone explain, like this minibus taxi filmed in Queenstown in the Eastern Cape this afternoon.

The Toyota Quantum had a road sign piercing through its front part of the roof and moving on the road like it was nothing.

While the full circumstances are not known, considering the taxi driver lawlessness in the country, one may be persuaded to think that the driver crashed into the road sign while illegally driving on a pavement. 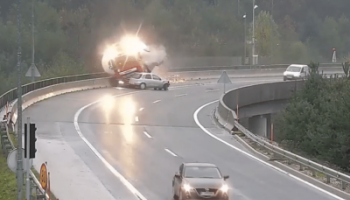