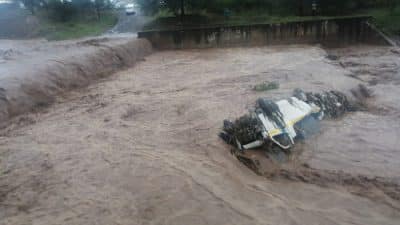 Durban – Four people were lucky to escape when a taxi was swept into the flooded Duzi River on Wednesday following heavy rainfall in KwaZulu-Natal.

ER24 spokesman Ross Campbell said that the taxi was driving on Barnsley Road, in the Camps Drift area of Pietermaritzburg.

“Flash flooding from the heavy rain in the area meant the normally calm stream had burst over the top of the bridge, taking the taxi with it,” he said.

“Luckily a series of concrete bollards caught the vehicle before it dropped further over into the deeper water.”

Watch: Truck caught on camera capsizing due to load shift