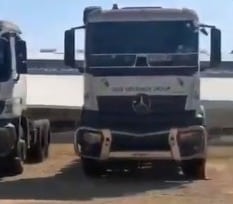 The auctioning of Sam Holdings trucks at Aucor Auctioneers in Midrand has once again ignited the story of the rise and fall of fugitive Sam Mshengu Chabalala.

Chabalala whose real name turned out to be Gilbert Tachuona from Zimbabwe is missing on the scene after failing to appear in court.

Now, a video of Sam Holdings trucks at an auction yard have surfaced on social media. The video shows at least 10 trucks lined up for sale.

It could not be immediately established how many of Sam’s trucks were up for sale.

Chabalala disappeared after leaving a suicide note, he was last seen by his employees on March 3.

“I am not worried about the court cases but the incident that happened on Sunday it’s clear that these people are really meaning to kill me [sic],” Chabalala said.

“My worry is I never wrong anyone, or steal for anyone or this country, what really I have done to deserve this [sic]. Sam holdings I started it from nothing with the help of no one, but now it’s clear that my business and success is the source of all my current problems I’m facing [sic].”

In the note, Chabalala said he could not continue endangering the lives of those who are close to him and that he intends on saving his business.

“…They failed to keep me in jail now they come straight to kill me. The people I used to call my friends and I did help them are the ones destroying me right now.”

In the note, Chabalala alleges that the Hawks have been paid to hound him.

“I know my wife you wish to barry my body [sic] but I hope you will be able to find the remaining [sic] of me as I’m going to throw myself in the crocodiles river or game reserve after Pongola as you go to Lwulwuwe [Hluhluwe] N2. I have hiked to come here.”

Hawks spokesperson Brig Hangwani Mulaudzi refused to be drawn into the suicide note saga and said Chabalala failed to show up in court and there was a warrant of arrest that has been issued against his name.

“Investigations to track him are underway and we’ve called on the law-abiding citizens to contact their nearest police stations or Capt Dietlof Meyer on 071 481 2977. All information will be kept confidential,” Mulaudzi said.