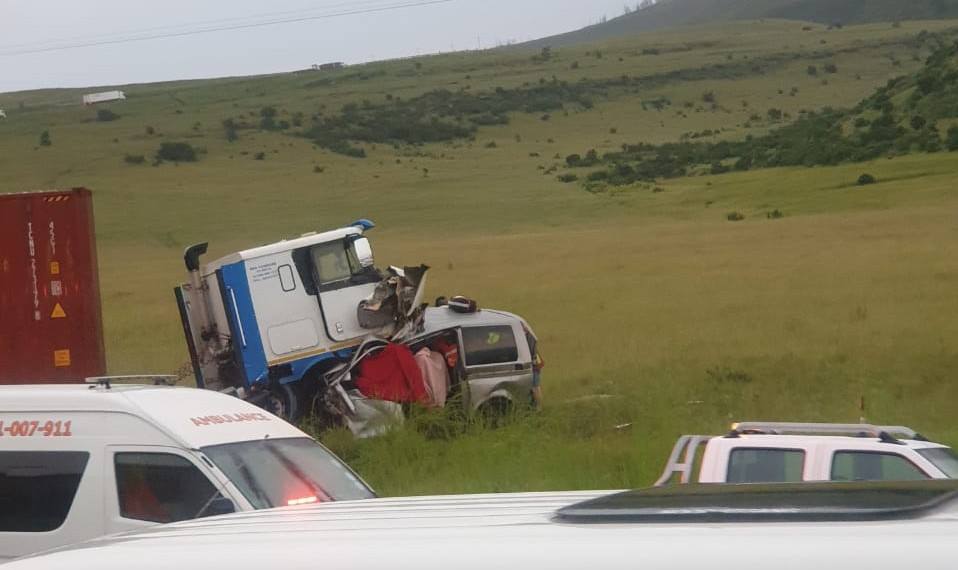 Seven people died and one is in a critical condition following a horrific accident between a truck, a Kombi and a Pajero on the N3, Harrismith on Sunday evening.

The accident happened at the infamous ‘S’ bend between Harrismith and Montrose.

Ross Campbell, ER24 spokesperson, said the Pajero was found up against the barrier on the Johannesburg bound side of the N3 and the Kombi was found wedged under the front of an International truck, in the veld, on the Durban bound side.

“Two people were found deceased in the Pajero and were declared on arrival by the Free State EMS.

Five people in the Kombi, believed to be from one family, were found with fatal injuries and also declared on arrival by the Free State EMS. All the occupants were found entrapped in the vehicle.

“The only survivor from the Kombi, a 15-year-old boy, was also found entrapped in the vehicle. It took teamwork from all the emergency services on-scene to help keep the truck from collapsing further while others helped extract the critically injured patient. He was treated and transported to hospital by the other private medical service on scene.”

Campbell said both sides of the Freeway were severely backed up following the incident but the N3TC, as well as the SAPS Highway Patrol, were on scene to control traffic as well as for investigation.

“ER24 would like to thank all of the services on the scene for the teamwork in saving the 15-year-old boy.”

While the cause of this accident is not known yet, SA Trucker would like to urge truck drivers to be extra cautious when driving on this part of the N3 locates between Montrose and Harrismith.

The risk of losing control of your truck is high because of the steep slope from both directions of the freeway and the sharp curve at bottom.

A lot could go wrong on this part of the highway hence it’s advisable to reduce your speed so that when something happens the impact may be minimal.

This video of the accident scene was sent to SA Trucker.