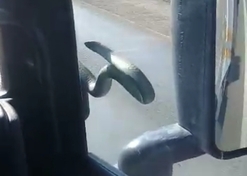 Strictly NO PASSENGERS of whatever sort and I happily obey. But this snake did not ask for an invitation and it made sure it took the ride under any circumstances.

A video of a snake hanging onto a truck’s windscreen while it was moving was sent to SA Trucker.

In the first video shared on SA Trucker Facebook page the snake is on the windshield and looks on inside the cab as if it wants to jump right in.

When the trucker switches his wipers on, the snake is swept to the right hand side of the windshield but manages to hang on.

The snake changes positions, coming onto the driver’s side mirror and shows the intention of getting inside only to be stopped by the window.

For a few seconds it disappears on from the driver’s view then resurfaces on the mirror again.

It is not know how the saga ended, SA Trucker has reached out to the trucker involved and will update as soon as possible.

Watch the second video below:

How to fake truck driving experience?