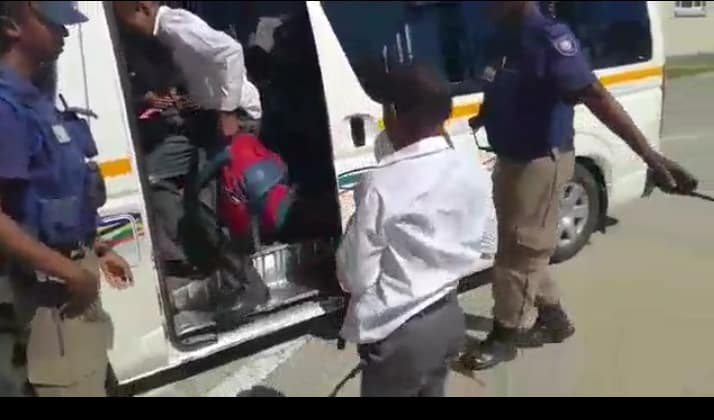 WATCH | Taxi caught with 48 people aboard

Nelson Mandela Bay Metro Police Department officers got more than they bargained for on Monday when they pulled over a taxi driver on suspicion of overloading.

“Officers were patrolling in Chase Drive, Port Elizabeth, when they observed a white Toyota Quantum minibus driving in the opposite direction.

“One of the constables then noticed that the vehicle was overloaded with passengers. He turned the vehicle around and pursued it,” Nelson Mandela Bay communications officer Kupido Baron said on Tuesday.

Police stopped the vehicle at approximately 14:30 and confirmed their suspicions. They removed 45 school kids from the minibus. There was an adult passenger in the front seat and the 26-year-old driver.

“On inspection of the vehicle his suspicion was confirmed that the vehicle was indeed overloaded with school kids sitting literally on top of each other.

“The driver was then escorted to Sidwell traffic department where it was weighed for overload and the passengers counted and a total of 48 passengers were head counted including the driver,” said Baron.

The vehicle in question had a valid operator card but was only authorised to carry 16 passengers.

The driver was subsequently arrested and detained at Algoa Park police station.

“Please refrain from overloading your vehicle because if you should be involved in an accident it can cause serious injuries, loss of limbs and even death as the vehicle is not designed to transport more than the allocated totals and the passengers standing or sitting on top of each other are not secured and if we catch you, you will be arrested,” Baron cautioned.

The municipality further urged parents to make sure their children are safely transported to and from school.

“Do not allow your kids to get into a vehicle visibly overloaded. Also make sure the driver has the required licence to transport passengers and the vehicle is in a roadworthy condition,” Baron concluded.