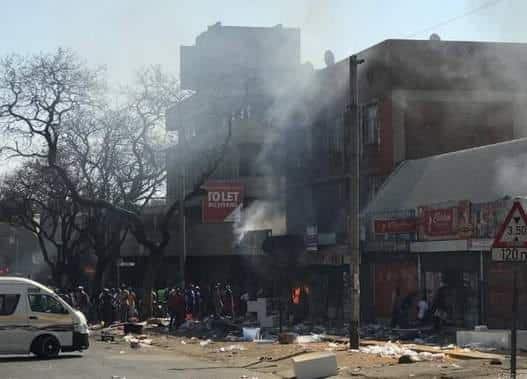 Pretoria – Angry taxi drivers littered the streets of Pretoria with an array of objects after a taxi driver was shot dead on Tuesday.

The atmosphere is tense and volatile.

According to Sowetan, taxi operators found people, believed to be police officers, were allegedly involved in the selling of drugs on Tuesday.

Angry taxi operators then used the city’s buses to block traffic to “deal” with the nyaope (drug) boys.

“A shooting which resulted in the death of a taxi driver is reported to have incited the riots, which led to two A Re Yeng buses, three Tshwane Bus Service (TBS) buses, a Gautrain bus and two trucks being utilised to blockade the roads. A Re Yeng and TBS operations were halted for the rest of the day in the interest of safety,” Tshwane Transport MMC Sheila Senkubuge told SA Trucker.

#pretoriacbd Cleaning up Pretoria streets has began. Chaos all over. pic.twitter.com/imZlyNE49U

Parts of the CBD are considered a no-go zone and a heavy police presence had been deployed in the affected areas.

Truckers are warned to avoid the CBD until the situation gets back to normal.

Translux and City to City bus services, a division of PRASA are…