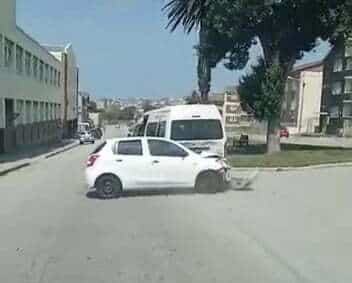 A video of a minibus taxi chasing after an e-hailing car and purposefully crashing into the vehicle in Port Elizabeth has gone viral on social media.

The video, which was posted by PE Traffic Updates on Facebook yesterday shows the Toyota Quantum taxi chasing the Uber car.

Meanwhile, the taxi reverses straight at the car and crashes into it immobilizing it in the process.

Two men emerge from the taxi and goes to confront the Uber driver who is ready for them holding something in his hand.

As the two notice that the man is ready to engage they walk back to the taxi and speed away.

The post has been shared over 1300 times within 24hours after it was posted.

Violence between e-hailing drivers and taxi operators have been ongoing for long in many provinces.

Watch the video below;

A 48-year-old truck driver, apparently on bail for a case of smuggling…