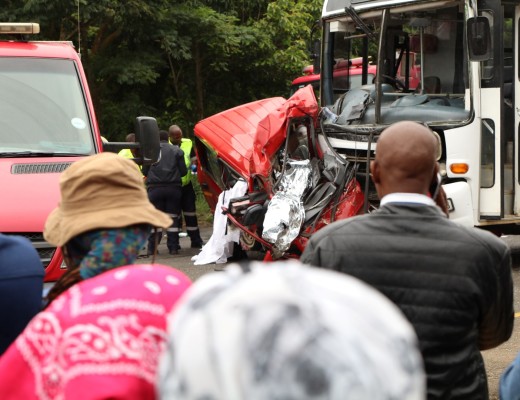 Watch the moment a taxi collides with a bus near Empangeni, killing five people instantly

SHOCKING video footage has emerged of the fatal taxi and bus crash on the R102 on Monday afternoon that claimed the lives of six people.

The footage, captured by the dash cam of the bus, shows the moment of impact between the two vehicles.

It shows the taxi clipping the back bumper of a Toyota Tazz before swerving into the oncoming lane.

A further nine people injured in the collision which occurred just before the KwaDlangezwa (University of Zululand) intersection about 15km from Empangeni.

The taxi was travelling from Pietermaritzburg to Empangeni.

The ZO spoke to the visibly shaken bus driver, Bonginkosi Dlamini who works for Mtunzini Bus Services on the scene.

‘The taxi suddenly pulled right in front of me, trying to overtake a car I think.’
He explained he did not even have time to brake but tried to swerve before the taxi smashed into the bus.

‘The MEC learned with shock of the passing away of five passengers during a road accident near Empangeni,’ spokesman for the MEC, Mluleki Mntungwa, said.
‘We appeal to members of the family to be patient as police investigate the exact cause of this tragic crash.’
Kaunda also cautioned all motorists to drive with extra care in heavy rains in the province.

‘We urge motorists to drive at a safe following distance and to stick to the rules of the road,’ Mntungwa said.

Kaunda planned to convene a meeting with the families of the victims on Tuesday (today) and visit the survivors at Ngwelezana Hospital.

‘Road carnage is really a cancer that is difficult to cure. We send our heartfelt condolences to all those families who were expecting their loved ones to come back home after travelling from different destinations before meeting their untimely passing.

‘What is worse for us as the City of uMhlathuze is that our minds are fresh from another gruesome accident that took four lives on N2 near eNseleni two weeks ago,’ Mhlongo said.

He urged drivers to be extra careful at all times.
‘Just when we begin to be happy that we are getting some rain, we experience such horrible accidents. We plead with all drivers to obey the rules of the road and be extra careful,’ said Mhlongo.

WARNING: The video footage below is not for sensitive viewers.

Pretoria – Angry taxi drivers littered the streets of Pretoria with an…