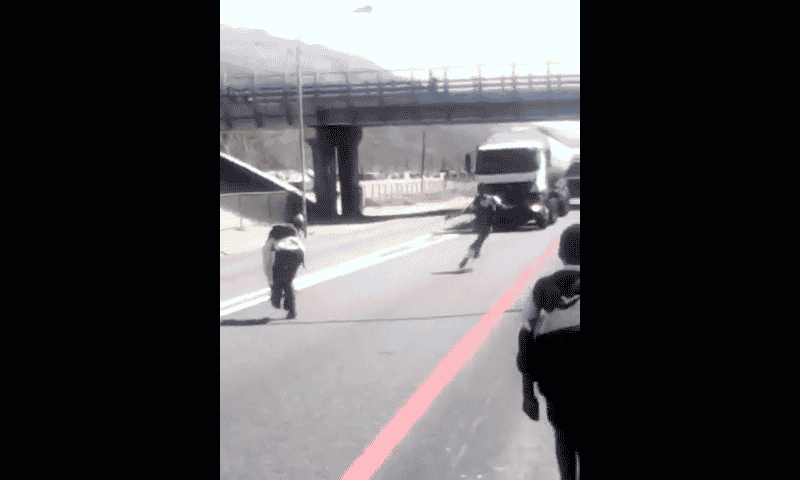 A truck driver has come out to tell his horrific experience at the hands of adrenalin seeking Western Cape school kids. This after they diced with death, placing themselves in front of his speeding truck only to jump off seconds before disaster could strike.

A video of the incident is doing rounds on social media showing pupils clad in their school uniforms‚ run towards the truck and‚ just before it smashes into them‚ they dive out of the way.

The video capturing this daring scene of school pupils dicing with death was shot along the N1 in De Doorns‚ Western Cape‚ and it has gone viral.

In the footage‚ the uniform-clad pupils are seen first running towards the truck‚ before moving out of its way just split seconds before it can strike. While one pupil is heard shrieking in fear‚ the person taking the video – who is believed to be a minor – is heard laughing in the background.

“There are two coming‚” he says to two boys who are about to go in for their adrenalin rush.

The one pupil runs into the road in front of the truck and stops briefly‚ pretending to be tying his shoelaces just a few metres from the approaching truck. He then darts out of the truck’s way seconds before it reaches him.

One of the truckers hoots as he barely misses the child.

Thulani Bhengu, who was driving the second truck in the video said he cannot stop thanking God for seeing him through.

“I could not believe my eyes, you know you never think that someone would run towards a speeding truck but they did, it helped that I didn’t panic otherwise you would have heard that school kids were killed by a truck,” he said.

Bhengu said it was not an easy experience, he struggled to drive about 5 km to get to a safe place to stop and gather himself back.

His words of advice were, ‘Always be hundred percent focused when driving and try not to panic when faced with danger.’