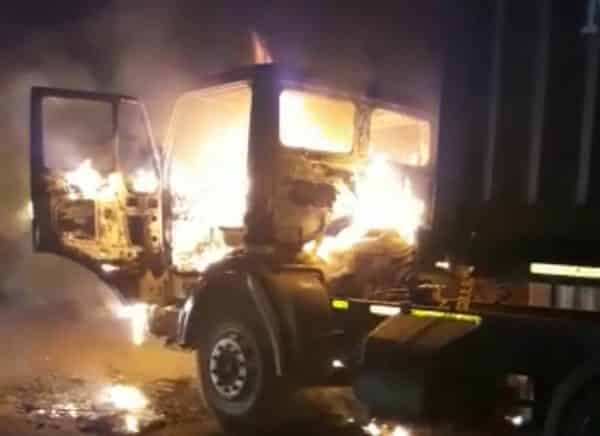 WATCH : Truck driver ambushed and burnt in his truck

Durban – A truck driver have been burnt and seriously hurt while another one escaped harm in separate incidents after they were ambushed by unknown assailants in Durban last night.

It is alleged that the driver was woken from his sleep by the breaking of his truck window while sleeping just outside Southway Container depot around 02h00 this Saturday morning.

As he gathered himself together a petrol bomb was thrown inside setting him and the truck alight.

He managed to jump off the truck and with the help of other truck drivers they doused the flames on his body.

An ambulance was called in and paramedics treated the man on the scene before transporting him to hospital.

The truck burnt to the ground.

The attackers are not known and the police have not yet commented.

“The war on foreign truck drivers will continue until they are all gone,” Sipho Zungu, ATDF chairperson was quoted saying in The Witness.

Zungu said angry truck drivers had taken a decision to torch trucks last after they were “disrespected” by the national Transport Department.

Prior to this attack and around 21h40, a petrol bomb was thrown into a truck while moving and the driver managed to stop the truck and ran away.

It could not be immediately confirmed if he sustained any injuries.

Read also: Foreigners are not taking our jobs, the government is failing to create jobs

The attack happened on the on ramp to M7 west from Umbilo near the Southway Mall.

The truck was burnt to the ground, only the tipper trailers survived the inferno.

The reach stacker, a vehicle used for handling cargo containers in terminals…