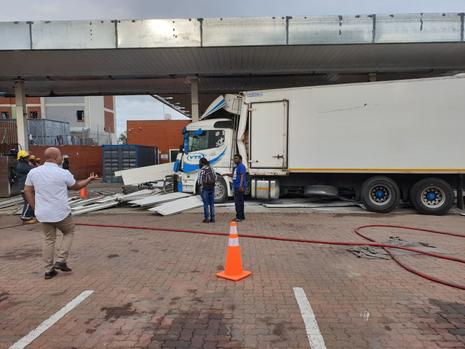 DURBAN – The driver of a heavy vehicle averted disaster in peak-hour traffic on Wednesday, avoiding commuters, taxis and cars by swinging into a petrol station under renovation, injuring three people.

Rescue Care paramedic Rowan Scandroglio said after the driver lost control of the large truck, he turned into the garage, which was being refurbished.

“The driver knocked one petrol attendant and two construction workers before coming to a stop,” he said.

A hazardous materials official said a “diesel bowser” was knocked over.

The driver of a large horse and trailer averted disaster in peak-hour traffic, avoiding commuters, taxis and cars by swinging into a petrol station.

According to a bystander, the driver did not sustain any injuries. He said after the driver saw several taxis parked on the right side of the road, he tried to dodge them by turning into the garage.

“The driver only saw two cars at the garage and thought it would be better to cause damage to property than to kill people,” he said.

A construction worker said: “He drove into the trees at the side of the road before he crashed into the garage.”

The truck was towed out of the garage.

Over 200 military trucks, trailers, Nyalas and other military equipment burned to…
Total
5
Share
5
0
0
0
0