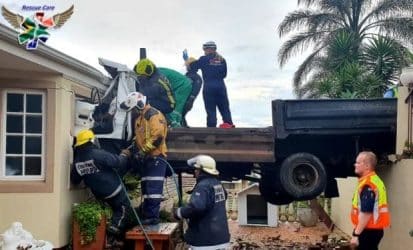 Durban – A truck driver who lost control of his vehicle that crashed into the wall of a house in Reservoir Hills, KwaZulu-Natal, on Thursday has died, the authorities say.

According to Jamieson, the two passengers who were seated in front with the driver were trapped in the cab and the Jaws of Life was used to free them. The other four passengers were travelling on the back of the truck.

The accident happened at about 17:30 on Thursday, said Jamieson.

No one in the house was injured.

A truck driver has died after his vehicle crashed into a house on Battersea Avenue in Reservoir Hills a short while ago. Five others were injured. Fortunately, no one in the home was hurt. pic.twitter.com/YRFMmnQgAY

TRUCK ROLLS INJURING ONE IN DURBAN