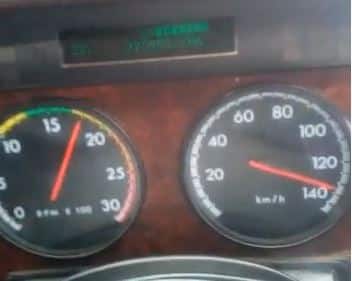 A video of a truck driver filming himself dangerously overspeeding on an unidentified South African highway has gone viral on social media.

The video clearly shows that it was shot by the driver himself.

At the start of the 42-second video, the truck is registering 113km/h while there is another truck ahead of him.

When the truck moves off to the left lane he accelerates to 134km/h.

The driver moves the camera to show a VW van overtaking him before he cuts off the video.

This video surfaces when another truck driver is being sought by Traffic Authorities after he was filmed dancing while driving.

The Road Motor Transportation Corporation (RTMC) said he would face charges of reckless driving if found.