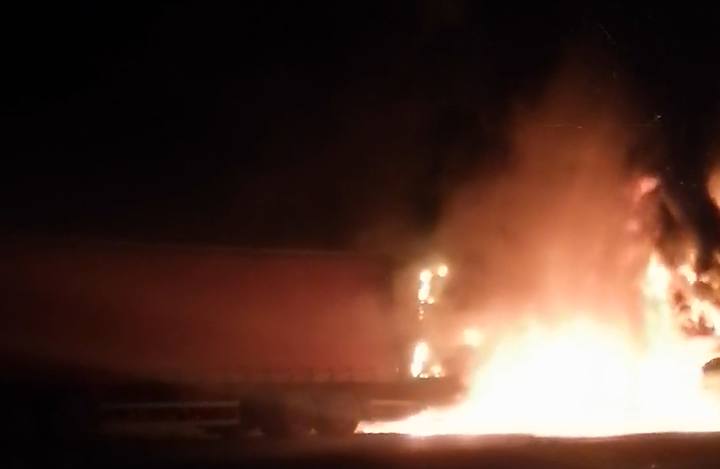 Truck driver violence seems to be flaring up again in KwaZulu Natal following incidents of alleged ATDF ASA members harrassing foreign truck drivers in Richards Bay followed by the burning of a truck between eSikhawini and Mtunzini on the N2.

The culprits can be heard telling one of their victims that he should get his salary at the end of the month and leave the job so that a local truck driver can take over.

They further threaten the foreign truck driver that if they meet him again there will be hell to pay.

According to information from SA Trucker sources, the suspects were driving a blue VW Polo.

Alleged ATDF ASA members harrass and intimidate a foreign truck driver in Richards Bay yesterday. A few hours later, a truck was reportedly shot at and set alight on the N2 between eSikhawini and Mtunzini pic.twitter.com/sNc0rbbCx2

At around 21h30 a truck was attacked on the N2 not far from where the harrassment took place.

It’s alleged that a truck was shot at and later set alight. The drive abandoned the truck and ran for dear life.

These attacks come as messages of a national shutdown for the trucking industry flood social media.

ATDF ASA and SANCATDRA are alleged to be behind the shutdown plans.

ATDF ASA secretary general denied that they organising it even though some of them have the ATDF ASA logo on them.

According to the messages, the national truck industry shutdown will be on 25 January 2021.

Tshepang Phohole, a warehouse picker from Pretoria, together with his family blew…

47 truck drivers, some, transporting maize from South Africa to Zimbabwe have…

Durban – A truck driver is lucky to be alive after he…