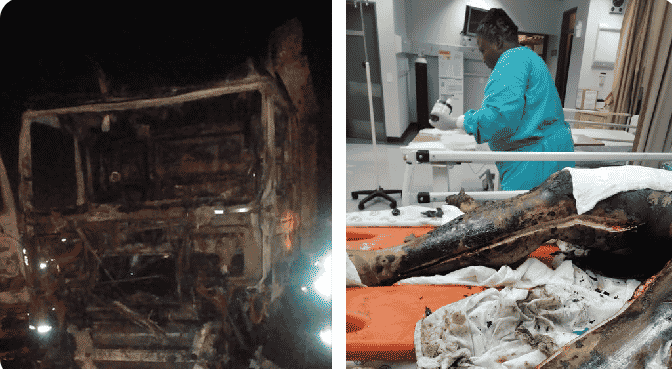 Watch: Truck driver shot and burned to death in his truck in Wadeville

As the #TruckDriversShutdown continues, a truck driver has lost his life after allegedly being shot and then petrol bombed outside Reef Truck Stop in Wadeville on Monday night.

According to truck drivers who witnessed the incident, the driver was shot before his truck was petrol bombed.

When paramedics arrived, the man had already died inside his burnt out truck.

SA Trucker awaits official confirmation of the trucker’s death and cause.

Pictures of the charred remains of the truck driver started doing rounds immediately after the incident just before 22h00 last night.

At around the same time, two other trucks in the same area had also been set alight by attackers and a fourth truck had shots fired at it.

The attacks come after an unsigned notice of a national shutdown by SA truck drivers protesting the employment of foreign nationals in the trucking industry.

Although unsigned, the document was widely viewed as coming from the All Truck Drivers Forum (ATDF), an organisation which has in the past aligned itself to and called for protests against the employment of foreign drivers.

SA Trucker spoke to ATDF secretary, Sifiso Nyathi, after the Thursday night attacks and he denied that his organisation was involved.

“We don’t know who the attackers are but certainly it’s the ATDF,” Nyathi said.

However, SA Trucker received a memorandum of demands on the official ATDF ASA letterhead and addressed to Transnet which was handed over on the first day of the shutdown.

On Tuesday morning, two trucks were reportedly burnt on the N3 highway in broad daylight.

Information about that attack is however still sketchy.

Two suspects aged 38 and 43 were arrested on Sunday, 29 December…